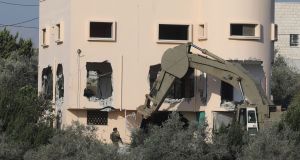 An Israeli army bulldozer destroying the family home of Ashraf Naalwa, who was suspected to have killed two Israelis in an attack at the Barkan industrial zone of the occupied West Bank in October. Photograph: Alaa Badarneh/EPA

Israeli ministers have approved a Bill authorising the government to order the expulsion of the families of West Bank militants, in response to an upsurge in attacks against settlers and soldiers.

The sponsors of the measure, from the far-right Jewish Home party, believe that giving the West Bank military commander the authority to relocate the family of a Palestinian assailant from their place of residence to another West Bank location within a week of an attack will deter Palestinian gunmen.

The Bill will be presented to the Knesset for a vote in the coming weeks despite vocal objections made by Israeli legal officials.

Attorney general Avichai Mandeblit argued that the Bill was unconstitutional because the family of a gunman could not be punished without proving they intentionally helped the attacker. He warned that the legislation contradicted international law and could cause trouble for the Israeli government in international legal forums.

“Maintaining deterrence is the cornerstone of Israeli security as a means of saving lives and preserving law and order,” said Jewish Home leader Naftali Bennett. “The steps outlined in this Bill have a proven deterrent effect and can save lives.

“Terrorists no longer fear us,” he continued. “Jews are being murdered because carrying out terrorist attacks has become a lucrative business for Palestinians and judicial overreach is crippling the defence establishment.”

Shabtai Shavit, a former Mossad head, said the government’s policy is to keep intensifying its might without employing any ideas that could bring quiet.

“Demolishing houses and expelling families is not recognised by international law. The fact is the attorney general is opposed. I believe that the prime minister will deliberate at length because he also doesn’t like these measures which, every time we employ them, bring on us condemnation from any country in the world that is even mildly liberal.”

Ministers also voted in favour of another Bill to legalise houses in some 70 West Bank outposts and neighbourhoods that were built over the past 20 years without government approval, outside of the boundaries of existing settlements.

Under the terms of the Bill, settlers living in these locations – mostly small hilltop communities – will be entitled to the same municipal services that all Israeli citizens receive, including being connected to the water and electricity infrastructures.