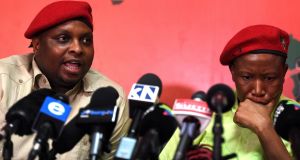 Allegations of corruption that have been levelled at the leadership of South Africa’s Economic Freedom Fighters (EFF) party could not have come at a worse time for the radical left-wing movement.

With less than six months to go to a general election that the EFF hopes will make it a national political kingmaker, the party’s standing has been seriously undermined by claims it was involved in looting a rural bank, and tender fraud.

Less than a year ago the situation was very different for the country’s third-largest political party, which attracts support from marginalised voters disillusioned with post-apartheid South Africa and corruption in politics.

Formed in 2013 by Julius Malema – a former African National Congress youth league leader who was expelled from the ruling party in 2012 – the EFF secured 25 seats in parliament and 6.35 per cent of the vote at its first attempt to contest a national election in 2014.

While often criticised for its militancy, bullying tactics and perceived racism towards minority groups, the EFF solidified its status as a political force by adopting populist policies and relentlessly attacking former president Jacob Zuma over his alleged corrupt activities.

In the 2016 local elections, the EFF grew its support base to 8.14 per cent of the electorate, and got its first taste of being a political kingmaker when it formed coalitions with the main opposition Democratic Alliance in three major cities to wrest control of them away from the ANC.

But in recent months its corruption-busting image has been sullied by accusations that Malema and his deputy, Floyd Shivambu, have received millions of rand of looted money.

In October Brian Shivambu, the brother of the EFF’s deputy president, was accused in a South African reserve bank investigation of receiving 16,148,569 rand (nearly €1 million) in money stolen from VBS Mutual Bank by its executives.

Then in November, online newspaper the Daily Maverick published an investigative report that suggested Malema and the EFF also received millions of rand in patronage linked to a 1 billion rand tender in Johannesburg, in return for working with its coalition partner, the Democratic Alliance, which runs the city.

Malema, Shivambu and the EFF have rubbished the allegations. But instead of allowing the law to take its course, the EFF has decided the best form of defence is attack.

Addressing supporters outside a commission of inquiry investigating public sector corruption at which Gordhan was giving evidence in November, Malema accused the respected minster of being corrupt and labelled journalists who reported on his woes as ANC apologists.

He urged the party to “deal with them [the journalists] decisively” and likened their reports to Bell Pottinger, the now defunct UK public relations firm that came under fire in 2017 for spreading misinformation in South Africa on behalf of the controversial Gupta business family.

On November 26th Malema and the EFF made a criminal complaint with the police against Gordhan and his daughter, Anisha, who he said helped her father to amass a fortune in an offshore Canadian bank account that people filled with bribes in return for political favours.

Gordhan has denied the allegations. When the Canadian bank details Malema gave to the police as evidence of the minister’s wrongdoing were checked out by reporters, it was revealed the account number and bank branch did not exist.

Institute for Security Studies political analyst Jakkie Cilliers said if the corruption allegations made against the EFF’s leadership turn out to be true, the party’s “champions of the poor” image will be severely damaged.

“The EFF were media darlings because of the way they pursued Jacob Zuma before the ANC removed him from office in February, and because they reflected people’s genuine concerns around poverty and economic apartheid. They will lose a lot of legitimacy if they turn out to be corrupt,” he told The Irish Times.

“The reaction to the party on social media as well as in the press has changed following the emergence of these allegations. They are increasingly seen as proto-fascist and I think their easy ride with the media is over.”

Cilliers added he did not think the EFF’s core support would abandon it over the recent developments, but the leadership’s actions “will delegitimise the party among the broader electorate” where it is seeking to make gains in the 2019 poll.

“In addition, it will be much harder for the EFF to score political points in the months ahead with Zuma out of the picture, and if more corruption allegations emerge their chances of acquiring that ‘kingmaker’ status on the national stage will diminish.”