No one can dictate reform policy to China, says Xi

Chinese President Xi Jinping summed up the great achievements of the country's reform and opening-up at a gathering in Beijing celebrating the 40th anniversary of the landmark drive. Video: CCTV 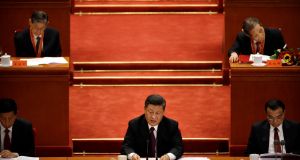 Chinese President Xi Jinping speaks during a conference to commemorate the 40th anniversary of China’s Reform and Opening Up policy at the Great Hall of the People in Beijing. Photograph: AP

No country can dictate China’s reform policy, a defiant Xi Jinping said in a speech to mark the 40th anniversary of the reform and opening up campaign that sparked the country’s remarkable rise.

“No one is in the position to dictate to the Chinese people what should and should not be done,” president Xi said in an address to the Communist Party elite in Beijing’s Great Hall of the People.

In his 80-minute speech, Mr Xi addressed a host of issues, from the environment to efforts for “peaceful reunification” with self-ruled Taiwan to the country’s territorial claims in the South China Sea.

While the economy has been transformed in the four decades, politically China has changed little and under Mr Xi there has been a crackdown on civil society, press freedom and human rights.

China has been criticised for holding hundreds of thousands of largely Muslim Uighurs in re-education camps in the restive western province of Xinjiang.

“China is moving closer to the centre of the world stage and has become recognised by the international community as a builder of world peace, a contributor to global development and a defender of the international order,” he said.

“What and how to reform must be based on the overarching goal of improving and developing the socialist system with Chinese characteristics,” Mr Xi said. “We will resolutely reform what should or can be changed, but will never reform what cannot be changed.”

The four-decade campaign of economic reform was begun by the late Deng Xiaoping and saw the introduction of market reforms to transform what was a largely inward-focused rural society into the world’s second largest economy.

Hundreds of millions have been lifted out of poverty — the poverty rate among the rural population dropped to 3.1 per cent last year from 97.5 per cent 40 years ago.

However, under Mr Xi there has been an increased focus on state-owned enterprises and Communist Party control.

There is growing pressure on Xi to accelerate reforms and improve market access for foreign companies as a bitter trade war with the US weighs on the Chinese economy.

Without giving any specifics, Xi pledged to work towards lifting the economy.

Earlier this month, Xi and US president Donald Trump agreed to a 90-day ceasefire in the trade dispute, which halted the threatened escalation of punitive tariffs while the two economic powerhouses continue negotiations.

However, tensions have increased since the arrest in Canada of Meng Wanzhou, a senior executive at the tech giant Huawei, considered a “national champion” of Chinese industry, pending possible extradition to the US. China responded by arresting two Canadian citizens on unspecified charges.

Huawei is based in Shenzhen, a bustling city in Guangdong province just across the border from Hong Kong, where Mr Deng launched the reform programme four decades ago.

1 Miriam Lord: Leo’s Phoenix pecs just a storm in a bag of cans
2 Explainer: Did the Taoiseach ignore public health rules by going on a picnic?
3 Dig for remains of Red Hugh O’Donnell finds skull and coffins
4 Coronavirus: Need to move away from the ‘language of blame’ - Holohan says
5 Trump pushes murder conspiracy theory about TV show host
Real news has value SUBSCRIBE