Hardline conservative picked ‘because the president liked him – they get along’ 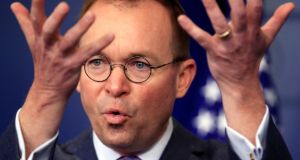 US president Donald Trump announced on Friday that he had selected Mick Mulvaney, his budget director, to serve as his acting chief of staff, temporarily halting a week of speculation about who would take over one of the most important positions in the federal government.

Mr Mulvaney, a hard-line conservative and former congressman from South Carolina, is a fiscal hawk who has produced budgets that cut federal spending only to see congressional Republicans and Democrats ignore them. He was more successful in a rare, dual-hatted role that Mr Trump had given him, overseeing the Consumer Financial Protection Bureau, where he scaled back the mission, and in many ways neutered its influence, in keeping with the president’s view of the agency.

Nevertheless, unlike the two others who have served as Mr Trump’s chief of staff, he brings an understanding of the intersection between the White House and Congress. Mr Mulvaney emerged as the president’s choice for a position that, in other administrations, has been akin to the chief operating officer of the country, after high-profile announcements from others that they were not interested in the job to replace John Kelly. Mr Kelly is set to leave the position by the end of the year.

On Friday, a senior administration official, who spoke on the condition on anonymity, said there would be no end date to Mr Mulvaney’s role despite his “acting” title.

“There’s no time limit. He’s the acting chief of staff, which means he’s the chief of staff,” the official said. “He got picked because the president liked him – they get along.”

Chris Christie, the former governor of New Jersey, took himself out of the running for the job on Friday, saying in a statement that he had asked to no longer be considered a day after he met Mr Trump at the White House about it. Mr Trump did not offer it to him, but they had what was described as a good discussion.

“It’s an honour to have the president consider me as he looks to choose a new White House chief of staff,” Mr Christie said. “However, I’ve told the president that now is not the right time for me or my family to undertake this serious assignment. As a result, I have asked him to no longer keep me in any of his considerations for this post.”

Trump’s first choice to replace Mr Kelly, Nick Ayers, a political operative from Georgia who is now vice president Mike Pence’s chief of staff, turned down an offer from the president over the weekend and plans to leave the administration. Representative Mark Meadows, who said publicly that he was interested in the job, was ruled out Tuesday by the White House.