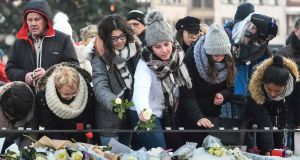 People light-up candles and deposit flowers during a gathering around a makeshift memorial at Place Kleber, in Strasbourg on Sunday to pay a tribute to the victims of Strasbourg’s attack. Photograph: Sebastien Bozon/AFP/Getty Images

A fifth person has died of their injuries after Tuesday’s Christmas market attack in Strasbourg, French prosecutors have confirmed.

An official from the Paris prosecutor’s office said the victim was a Polish national, but gave no other details. An Italian journalist, a Thai tourist, an Afghan mechanic and a French national were also killed in the shooting.

The suspected attacker, Cherif Chekatt, was killed by police on Thursday night following a two-day manhunt for the 29-year-old by 700 French security forces.

On Saturday, four relatives of the gunman were released from custody due to “lack of incriminating evidence”, but three people people close to Chekatt are still being held.

The French government has dismissed a claim by the Islamic State group that it was responsible for the deadly shooting at the Christmas market, but Chekatt’s father told French media on Saturday that his son had become an Islamic State, also known as Isis, follower.

Authorities have been focusing their investigation on the gunman’s potential support network and are working to clarify why he was not stopped before he could act.

Chekatt was well known to police, having served jailed time in France, Germany and Switzerland.

Earlier today more than 1,000 people attendeda an hour long memorial to the people shot dead and the dozen wounded by Chekatt.

Strasbourg mayor Roland Ries praised the city’s resilience in the face of hardship. “The presence on Saturday of an extremely large crowd in the Christmas market was an illustration of our commitment to these values on which our living together is based, which we will continue to defend against all those who want to attack it,” Mr Ries said. – Guardian and PA