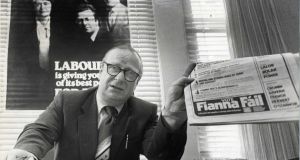 Catching the barman’s eye as we lifted ourselves on to a couple of stools in the Lords Bar, I asked for a gin and tonic and the baroness ordered a pint.

She wanted to meet there because it was, as she said, cheap and cheerful, if not as elegant as you might expect. With its pine tables and interrogation-strength lighting, it has the warmth and charm of a Soviet nuclear power station on a day of national mourning.

Still, the baroness and I passed a comfortable hour there bitching, backbiting, slandering, arguing and trading slurs. At no point did either of us punch one another.

A few metres away, however, in the Sports and Social Bar, they were knocking the lights out of each other. A 64-year-old man was taken to hospital after he was glassed in the face and police arrested a 57-year-old man on suspicion of grievous bodily harm and affray.

Eyewitnesses said one of the men was sitting quietly at the bar reading a newspaper through a magnifying glass when the other started needling him. Their exchange became heated and carried on in an alleyway outside, where it appears to have turned violent.

“Following an incident on the Parliamentary Estate last night involving two parliamentary staff, after leaving the Sports and Social Club bar, an investigation is under way and the bar will be temporarily closed until that investigation is complete,” a House of Lords spokesman said.

Plod in a headlock

Of all the bars on the Parliamentary Estate, the Sports and Social most resembles a regular pub, with its pool table, boards commemorating darts champions and display case full of sporting trophies. Parliamentary staff don’t need to be accompanied by an MP to drink there and it is popular with everyone from researchers to caterers.

When the Scottish Nationalists returned to Westminster in 2015 with 56 MPs, they colonised the Sports and Social, which had long before been a favourite haunt of working-class Labour MPs. This week’s fight was not the first the bar has seen, although few have been serious enough to attract the attention of the police.

An exception was in 2013, when former Labour MP Eric Joyce was arrested after passions flared during a karaoke session and he started throwing punches. When two police officers arrived, Joyce wrestled them to the ground and held one in a headlock. The MP, who had been expelled from the Labour Party after a drunken brawl the previous year, avoided any charges but he was banned from all of the Palace of Westminster’s bars.

The Sports and Social hit the news again last month when Alice Bailey, a former bar manager there, said she had routinely faced sexual harassment from MPs when she worked there.

“They fancied their chances because I was just a young barmaid and in their minds they were very important people who presumed I would be available,” she told the Sun.

The House of Lords announced recently that it was taking the bar back under its control after some years when it was run by an outside firm. There is talk of increasing prices and introducing further restrictions on opening hours in an attempt to stamp out disorderly behaviour.

Boozing is not what it was at Westminster, whose famous Annie’s Bar closed more than a decade ago after everyone stopped going there. Today’s MPs spend little time in the bars and are more often to be found in the vast atrium of Portcullis House, which is like an upmarket food court in a shopping mall.

In his fascinating and entertaining book Order, Order!, BBC political correspondent Ben Wright chronicles the rise and fall of political drinking. He identifies the riverside terrace as one of the most pleasant corners of Westminster to have a drink, especially during the summer.

The late Gerry Fitt enjoyed sitting on the terrace during summer evenings waving great glasses of gin and tonic at the passing boats and crying “It’s free! It’s all free”.

Wright reports that Fitt was popular with the river police, to whom he passed down drinks when they pulled in at the terrace. Asked why his first drink of the day was a gin and tonic with no ice or lemon, he explained that the ice cubes banging together made his hangover worse.