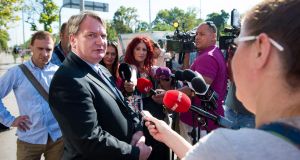 Hungarian MEP and member of Jobbik party Bela Kovacs: “I have never spied on EU institutions for any foreign power.” Photograph: Zoltan Balogh/EPA

Hungary’s far-right Jobbik party has accused allies of prime minister Viktor Orban of trying to wreck its election chances, after it was accused of financial irregularities and one of its members was charged with spying for Russia.

Janos Volner, the head of Jobbik’s parliamentary group, denied his party had broken campaign-funding rules by using billboard space offered by a wealthy critic of Mr Orban and his ruling Fidesz party.

Noting that the state audit office pursuing the case is “now led by a former Fidesz deputy”, Mr Volner said the threat of a €2 million fine for illegal funding “equates to the first step towards banning and clearing away Jobbik”.

“This situation makes it questionable as to whether Jobbik can take part in the parliamentary elections next spring,” he added. Even though Jobbik lies a distant second to Fidesz in opinion polls, it accuses Mr Orban of using his influence over all state institutions to undermine its bid to move into the political mainstream and take votes from his party.

Hungarian prosecutors on Wednesday finally charged Bela Kovacs, a Jobbik member of the European Parliament, with spying on EU institutions.

A spokeswoman for the prosecutors’ office told Reuters he is accused of spying for Russia, which came as no surprise to Hungarians who have followed the case of “KGBela” for several years.

Mr Kovacs lived in Russia for more than a decade before returning to Hungary in 2003 and becoming a key figure in Jobbik. He is known for his pro-Kremlin views, and as an “observer” he gave a positive assessment of the illegal referendum in Crimea that Russia used to justify its annexation in 2014.

Prosecutors opened the case more than three years ago, however, and Mr Kovacs and his erstwhile colleagues in Jobbik – from which he resigned on Wednesday – say the timing of the charges is clearly intended to weaken the party and distract attention from Fidesz’s own links with Moscow.

“I was pleased to learn that after 3½ years of suffering the prosecutor is going to charge me, because I will finally have the opportunity to refute the charges against me,” Mr Kovacs wrote on Facebook.

“I also declare today that I have never spied on EU institutions for any foreign power and I have not committed any budgetary fraud,” he added, referring to a separate charge relating to his alleged fictitious employment of interns.