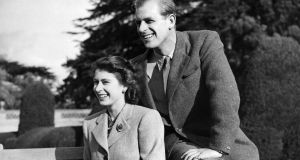 At St James’s Palace on Thursday afternoon, a small group of tourists peered earnestly through the railings at the guardsmen on sentry duty, snug and magnificent in their bearskins and greatcoats. Bored after a few minutes waiting for the sentries to move, the tourists moved along, turning the corner on to the Mall on their way to Buckingham Palace.

Kicking their way through thick clumps of autumn leaves and squinting against the sun, they fell in behind other groups heading to the palace in the hope of glimpsing one of the royals. As Queen Elizabeth and Prince Philip celebrated their 70th anniversary this week, the royal family appeared to be enjoying one of the more benign periods of its relationship with the public.

The anniversary party at Windsor Castle on Monday was, according to Hello!, a lavish event, “shrouded in secrecy”. It was so shrouded in secrecy that the magazine was able to describe every detail of the evening, which had Joanna Lumley as master of ceremonies and music by Dillie Keane.

“Guests sat down for a decadent meal of langoustine and pheasant. For pudding, they enjoyed a slice from a replica of the Queen and Prince Philip’s wedding cake. An ice sculpture, with the letters E and P intertwined, also served as decoration,” the magazine said.

There may be trouble ahead, however, when The Crown returns to Netflix next month for a second season that already has Fleet Street’s foulest on red alert. The German theatre director Peter Stein perfected a technique in his productions of Chekhov’s plays which made time appear to stand still on stage for a few moments. The Crown achieves something similar for hours at a time, with the action moving so slowly that you can doze off for half an hour and find that only a week of the queen’s life has passed.

The first season ended in 1956, just before the Suez crisis, with the queen taking every opportunity to demonstrate that in a choice between duty and love, there was no contest. She had forbidden her sister Margaret from marrying the man she loved, who was divorced, and she also frustrated Philip’s ambitions to play a more meaningful role.

In the new series, according to breathless reports, Philip heads off without his family on an extended tour of the Commonwealth, which is described as “a five-month stag do – whores in every port”. And in the opening episode, the queen finds in Philip’s bag a picture of a dancer, believed to be Pat Kirkwood, an actress who always denied having an affair with him.

“ROYAL DRAMA SHOCKER: Netflix’s The Crown portrays Prince Philip as a sex-mad adulterer who cheated on The Queen multiple times,” the Sun said.

In her book My Husband and I about the queen’s marriage, royal biographer Ingrid Seward lists some of the women Philip has been rumoured to have had affairs with. They include the Countess of Westmoreland, Daphne du Maurier, Merle Oberon, Anna Massey and Katie Boyle. Seward says that nobody has come up with convincing evidence to support the allegations and she quotes Kirkwood’s husband as saying after her death that he had correspondence between his wife and Philip which proves they did not have an affair.

“Even this comment, however, does not explain why she and Philip should have been corresponding with each other at all,” Seward says.

At 96, Philip is unlikely to be too perturbed about rumours of past dalliances and there are signs, in any case, that the public is becoming more forgiving. Even Princess Margaret, whose death in 2002 caused one obituarist to ask “what is a princess for?” is enjoying a rehabilitation of sorts.

Craig Brown’s Ma’am Darling – 99 Glimpses of Princess Margaret, the funniest book published this year, spares no detail of her monstrous behaviour. The stories of her rudeness are legion, from forcing guests to stay up all night because protocol forbade them to leave before her to the visit to Matlock in Derbyshire when she described the coronation chicken she was served as “looking like sick”.

Brown views her with more kindness and pity than disapproval, portraying an unhappy woman who was the victim of the very royal status she flaunted and of an absence of self-knowledge. At the end of the book, he describes her visit to David Hare’s play Skylight, which was set in a poky flat in northwest London and featured a female character wrapped in an overcoat, wearing woollen gloves and carrying three plastic bags.

After it was over, Princess Margaret was asked if she found the play depressing. “It was a bit like one’s own life,” she replied.