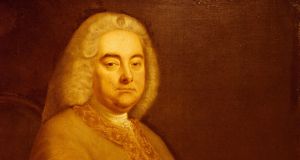 The city was a magnet for the talented and desperate from all over the country and for enterprising immigrants like George Frideric Handel. Artwork: Painting by Thom; Photograph by Erich Auerbach/Getty Images

Dwarfing every other town and city in Britain, it was the greatest metropolis in Europe, richer and more populous than Paris, Naples or Amsterdam. The centre of world trade, it was an international city, with a moneyed, leisured elite hungry for every cultural innovation from abroad.

This was London in the early 18th century, thriving, prosperous and newly rebuilt after the Great Fire of 1666. The city was a magnet for the talented and desperate from all over the country and for enterprising immigrants like the 25-year-old George Frideric Handel.

The young German composer had already found success in Italy and he was keen to capitalise on London’s budding enthusiasm for Italian opera. Less than three weeks after his music was included in celebrations of Queen Anne’s birthday, his opera Rinaldo opened at the Queen’s Theatre in February 1711.

Boasting spectacular stage effects, it featured Nicolini, the star castrato of his time, in the title role. Castratos, like Nicolini, had a cult following, including hordes of female groupies, and the opera was the talk of the town.

Then as now, however, the British press was suspicious of all things foreign and the Spectator led the charge against the cosmopolitanism of the elites.

“The opera house’s production of Rinaldo is filled with thunder and lightning, illuminations and fire-works; which the audience may look upon without catching cold, and indeed without much danger of being burnt; for there are several engines filled with water, and ready to play at a minute’s warning...Our great-grandchildren will be curious why their forefathers used to sit like an audience of foreigners in their own country to hear plays acted in a tongue they did not understand,” the paper wrote in March 1711.

The story of Handel’s opera in London forms part of Opera: Passion, Power and Politics, a spectacular new exhibition at the Victoria and Albert Museum (vam.ac.uk until February 25th). A collaboration with the Royal Opera House, it looks at the development of opera through the story of seven operas in seven cities, starting in Monteverdi’s Venice and visiting Handel in London, Mozart in Vienna, Verdi in Milan, Wagner in Paris, Strauss in Dresden and Shostakovich in Leningrad. A final room looks at a number of operas performed after 1945.

You put on a pair of high-tech headphones and a shifting musical accompaniment follows you through the exhibition in the museum’s new Sainsbury wing. The exhibition focuses on opera’s political and social dimension, from Mozart bringing everyday life onstage in La Nozze di Figaro in Enlightenment Vienna to Verdi’s Nabucco and Italy’s struggle for independence.

The changing role and perception of women feature in Strauss’s Salome and Shostakovich’s Lady Macbeth of Mtsensk, which displeased Stalin. But it is London’s response to the craze for Italian opera in the early 18th century that has most immediate resonance today.

Opera found itself at the centre of a struggle between the dynamism and internationalism of London as a commercial and cultural centre and the idea of some kind of pure Englishness. Daniel Snowman describes this tension in an excellent essay in the exhibition’s catalogue, quoting from Daniel Defoe’s The True-Born Englishman. In the poem, Defoe satirises the idea of ethnic purity, cataloguing all the immigrants who have made England, from the Romans through the Irish to the Normans:

“From this Amphibious Ill-born Mob began

That vain ill-natured thing, an Englishman.

The sustoms, surnames, languages, and manners,

Of all these nations are their own explainers:

Whose relics are so lasting and so strong,

They ha’ left a shiboleth upon our tongue;

By which with easy search you may distinguish

London’s 18th century elites, like the capital’s defiant Remainers today, ignored the xenophobic prejudices of the press and continued to enjoy the Italian opera, so that Handel stayed in London and made his career there. By the end of the following decade, however, the fashion had changed and Italian opera was in decline.

London audiences had a new enthusiasm, John Gay’s The Beggar’s Opera, a story about a highwayman and his girlfriends which was a huge hit, more popular than anything Handel composed. It was funny, with an entertaining plot and catchy tunes – and it was in English.