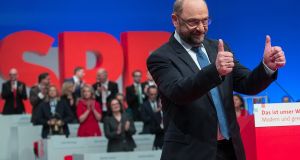 Martin Schulz, leader of the Social Democrat Party (SPD), after delivering his speech during the SPD’s federal party convention in Berlin on Thursday. Photograph: Krisztian Bocsi/Bloomberg

At the centre-left SPD’s federal conference on Thursday, party leader Martin Schulz secured the support of a large majority of the 600 delegates for open-ended talks to break a 10-week post-election deadlock.

Mr Schulz made a United States of Europe by 2025 a goal of any future co-operation with Dr Merkel’s centre-right Christian Democratic Union (CDU). But he vowed not to commit to either joining a formal coalition or backing a minority government until it was clear what concessions the CDU was prepared to make.

“Let us see what content we can push through and then let us decide in which form ... with no automatism in one direction or another,” said Mr Schulz, who was re-elected as party leader with 82 per cent delegate support.

After two CDU-SPD grand coalitions since 2005, exploratory talks are likely next week, though no result is likely until Easter.

Germans are still awaiting the formation of a new govertnment after a general election in September in which both of the outgoing governing parties – the CDU and the SPD – lost support. Coalition talks between the CDU and three other parties collapsed last month.

Mr Schulz apologised on Thursday for September’s electoral disaster in which the SPD secured 20.5 per cent of the vote and lost 40 of its 193 seats in the Bundestag. Though he couldn’t turn the clock back, he said, he would make things better by leveraging the party’s strong negotiating position in talks with Dr Merkel.

After her only other coalition option collapsed, the German leader’s fourth term hopes hinge largely on the SPD’s readiness to support her for the third time since 2005.

In a clear nod to Dr Merkel, Mr Schulz said Germany must back real European integration push and not continue “tinkering with the screws”.

The former European Parliament president called for a major push for closer European integration by 2025. Countries who voted against such a move, he said, could leave the EU.

“People: Europe is our life insurance,” he said, saying a more closely-knit EU was the best way to counter social cohesion dangers posed by globalisation and digitalisation.

He also vowed to push for greater tax harmonisation at EU level, claiming that “global corporations like Apple evade billions in tax and the Irish state acts as an accomplice”.

On domestic policy, he said the SPD wanted greater social spending and for a radical overhaul of Germany’s fragmented and underfunded school system. He also promised to end the SPD’s traditional prioritisation of industry – in particular mining – over climate obligations.

After weeks of emotional and divisive debate over the best path forward, including in the SPD front bench, leading figures rowed in behind the motion for open-ended talks – while still making clear their personal preferences.

SPD conservatives and the party youth wing favour going into opposition. They fear a third term co-operating with Dr Merkel would mean the SPD was digging its own grave and strengthen the far-right Alternative für Deutschland (AfD) party.

Being pre-occupied by power, others said, would leave the SPD unable to contribute to countering the wider malaise undermining social democracy across Europe. “We are dealing with a major structural crisis in developed countries,” said Olaf Schulz, SPD mayor of Hamburg and a likely future party leader.

Another camp called for a third way: limited support for Dr Merkel from the opposition benches.

“I think a toleration arrangement could be stable if negotiated on Europe and foreign policy [issues]Malu Dryer, SPD governor of the southwestern state of Rhineland Palatinate. “I think it would be wrong not to enter talks now, to say no before we even talk to each other.”

As delegates debated, knowing Europe was watching, scepticism appeared to evaporate and the mood seemed increasingly positive towards open-ended talks.

“This is living democracy,” said Prof Uwe Jun, political scientist at the University of Trier. “A majority seems to be in favour of parties talking to each other without promising anything.”