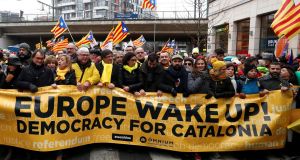 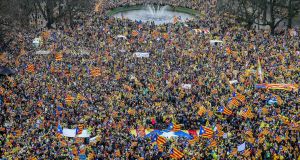 Nearly 50,000 people marched through the EU quarter of Brussels on Thursday in support of Catalan independence and the region’s deposed president, who has avoided arrest in Spain by taking refuge in Belgium.

Before Carles Puigdemont addressed the crowd, many draped in Catalan flags, police estimated its size at 45,000. There were chants of “Puigdemont, President” from a generally good-natured throng, many of whom had travelled from Spain for the occasion.

Some carried placards criticising the European Union for not pressuring Madrid to engage in dialogue with the Catalan nationalists. One sign showed the face of European Commission president Jean-Claude Juncker with the question: “Democracy? Some defend it when it suits them. Shame on them.”

Mr Puigdemont, who like many in the crowd wore yellow in support of jailed separatist leaders, addressed the crowd in Catalan before switching to French to direct a message to Mr Juncker. “Is there any place in the world that holds demonstrations like this to support criminals?” he said. “So maybe we are not criminals. Maybe we are democrats.”

Spain’s supreme court on Tuesday withdrew an international arrest warrant for Mr Puigdemont in order to bring his case back solely under Spanish jurisdiction. He and four of his cabinet members fled to Belgium when Madrid imposed direct rule on Catalonia and sacked his government after the Catalan parliament’s unilateral declaration of independence on October 27th.

He is likely to be detained if he returns to Spain, pending investigation on charges of sedition, rebellion, misuse of public funds, disobedience and breach of trust. Mr Puigdemont said on Wednesday he would remain in Belgium for the time being.

Gloria Cot, a clerk from Barcelona who had just arrived at the protest by coach, said: “Brussels is a kind of a loudspeaker for us.

“It is a loudspeaker so that people can know that we really don’t have a 100 per cent democracy in Spain and that Catalonia has always been subjected to problems with Spain.”

Nuria Salvat, a student from Tarragona in Catalonia, said she had come to demand freedom for “political prisoners” – members of Mr Puigdemont’s administration held in jail in Spain – and to support Mr Puigdemont himself. “Spain,has always treated us very badly,” she said.

A short distance away in the EU executive’s headquarters, Mr Juncker’s deputy Frans Timmermans told reporters he welcomed the “very positive atmosphere” of the demonstration, which took place as campaigning has got under way for a Catalan election on December 21st.

However, Mr Timmermans, the former Dutch foreign minister, said there was no change to European Commission policy that the dispute between Madrid and Mr Puigdemont’s administration, now removed from office. He said the dispute was an internal one in which the EU had no need to intervene because Spain’s democratic constitution was functioning in line with EU values.

Accusing Mr Puigdemont and his allies of undermining the rule of law by choosing to ignore a Spanish constitutional ban on secession rather than trying to change the constitution, Mr Timmermans said they were jeopardising basic freedoms and noted there had been big rallies in Spain on both sides of the debate.

“If you do not agree with law, you can organise yourselves to change the law or the constitution,” he said. “What is not permissible under the rule of law is to just ignore the law.” – Reuters