US Democratic senator steps down over sexual harassment claims 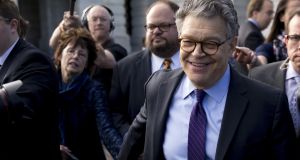 Al Franken walks away from the US Capitol in Washington, DC, on Thursday, with his wife, Franni Bryson, after he announced his resignation as senator. Photograph: Andrew Harrer/Bloomberg

Democratic senator Al Franken bowed to pressure and announced his resignation from the US Senate on Thursday, becoming the second Democratic politician to step down over sexual harassment allegations in recent days.

The Minnesota senator, a former comedian who shot to fame on late-night show Saturday Night Live, announced that he would resign in the coming weeks after at least eight women accused him of sexual misconduct.

His resignation came 48 hours after John Conyers, the longest-serving member of the House of Representatives, announced his resignation.

In a quietly defiant speech in the Senate, Mr Franken said: “Some of the allegations against me are simply not true – others I remember quite differently.

“I know in my heart that nothing I have done as a senator – nothing – has brought dishonour on this institution.”

In a jibe at US president Donald Trump and Roy Moore, the Republican candidate in next week’s special election in Alabama, Mr Franken added: “There is some irony in the fact that I am leaving while a man who has bragged on tape about his history of sexual assault sits in the Oval Office, and a man who has repeatedly preyed on young girls campaigns for the Senate with the full support of his party.”

Mr Franken had been coming under mounting pressure in recent days from his party colleagues, particularly female Democratic senators, to step down.

His resignation paves the way for a Senate election next year in the state of Minnesota, though the Minnesota governor is expected to appoint an interim successor in the coming days.

Meanwhile, FBI director Christopher Wray defended his organisation at a congressional hearing on Thursday following criticism from Mr Trump and members of the Republican Party in recent days.

At a scheduled hearing of the House judiciary committee, Mr Wray said he did not agree that the reputation of the FBI was “in tatters”, as stated by Mr Trump.

“The agents, analysts and staff of the FBI are big boys and girls. We understand we will take criticism from all corners,” he said.

1 Donald Trump is in trouble, and that could spell very bad news
2 Larger retail stores to reopen on Monday ahead of schedule
3 Taoiseach says €350 pandemic payment to be cut for some part-time workers
4 O’Doherty and Waters ordered to pay legal costs of case against State over Covid-19 laws
5 Madeleine McCann case: ‘We assume the girl is dead’, German prosecutors say
Real news has value SUBSCRIBE