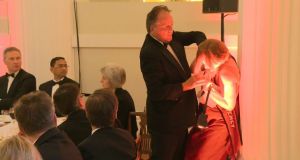 Conservative MP Mark Field tackles a Greenpeace climate protester at a dinner at Mansion House in the City of London on June 21st, 2019. Photograph: UK Pool/AFP/Getty

Boris Johnson and Jeremy Hunt begin their contest for the votes of Conservative Party members with a hustings in Birmingham on Saturday, a day after one Conservative MP lost his seat and another was suspended as a minister.

Chris Davies lost his Brecon and Radnorshire seat after almost 20 per cent of his constituents voted for his recall following his conviction for expenses fraud. Only 10 per cent were needed to trigger a byelection, which is likely to be held within days of the new Conservative leader taking office.

Prime minister Theresa May suspended Cities of London and Westminster MP Mark Field from his role as a junior foreign office minister after he grabbed a female Greenpeace activist at a black tie dinner at the Mansion House on Thursday evening. Janet Barker, one of a number of protesters who interrupted a speech by chancellor of the exchequer Philip Hammond, was walking past Mr Field when he grabbed her, pushed her against a pillar and gripped her neck as he walked her out of the room.

“The prime minister has seen the footage and she found it very concerning. The police have said they are looking into reports over this matter and Mark Field has also referred himself to both the Cabinet Office and the Conservative Party. He will be suspended as a minister while investigations take place,” Mrs May’s official spokeswoman said.

Mr Field apologised for his action but he said he had “instinctively reacted” to what he feared might be an armed assailant and that he was seeking to close down the threat to people nearby. Ms Barker said she did not intend to make a complaint to the police about the incident but suggested that Mr Field should attend anger management classes.

Visiting a factory in Worcester on Friday, Mr Hunt said the leadership election was about trust and about which candidate was best equipped to deliver Brexit promptly and with an improved deal. “Do you have the skills and can you be trusted as prime minister to get the right outcome?” he said.

“Thousands of jobs in the West Midlands depend on having a wise prime minister making sensible calls as to how we leave the EU promptly, but also in a way that does not harm business. I am that person,” he said.

Bank of England governor Mark Carney on Friday rubbished Mr Johnson’s assertion that Britain could avoid EU tariffs after a no-deal Brexit. During a candidates’ debate this week, Mr Johnson said that under Gatt 24, a World Trade Organisation rule, there would be no tariffs until Britain and the EU had agreed a trade deal.

Mr Carney said that tariffs would be applied automatically in the event of a no-deal Brexit because there would not be an agreement between Britain and the EU. “Not having an agreement with the EU means that there are tariffs automatically because the Europeans have to apply the same rules to us as they apply to everyone else,” he told the BBC.

“If they were to decide not to put in place the tariffs, they would also have to lower tariffs with the US, with Canada, with the rest of the world.”