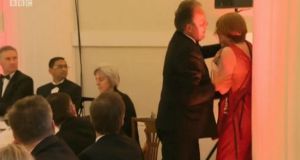 Tory MP Mark Field has been suspended as a foreign office minister after he was seen physically removing a climate change protester from a dinner in the City of London.

UK prime minister Theresa May made the decision after viewing footage of the incident, which she found “very concerning”.

City of London Police said they were looking into a “small number” of third-party reports of an assault at the Mansion House event.

Greenpeace protesters disrupted the black-tie event, where chancellor Philip Hammond was speaking, to demand action to tackle the climate emergency.

Mr Field was seen manhandling the female protester at the event in scenes described as “horrific” by Labour.

A Downing Street spokeswoman said: “The prime minister has seen the footage and she found it very concerning.

“The police have said they are looking into reports over this matter and Mark Field has also referred himself to both the Cabinet Office and the Conservative Party.

“He will be suspended as a minister while investigations take place.”

Greenpeace has accused Foreign Office minister Mark Field MP of assault, after he pushed a female activist out of a black-tie City event
Here's what happened 👇
Calls for him to resign. Do you agree? pic.twitter.com/B22AP7yBVM

Mrs May, who had been at a summit of European Union leaders in Brussels, is understood to have spoken to chief whip Julian Smith about the incident, who then informed Mr Field of her decision.

Greenpeace said that the activist removed by Mr Field, who they have not identified, “had a good sleep and is doing fine”.

“We’re looking after her. Thanks so much for your love and concern everyone. We’re sharing positive messages with her”.

Mr Field has referred himself to the Cabinet Office for investigation and has apologised “unreservedly” to the activist.

In a statement to ITV, Cities of London and Westminster MP Mr Field said: “In the confusion many guests understandably felt threatened and when one protester rushed past me towards the top table I instinctively reacted.

“There was no security present and I was for a split-second genuinely worried she might have been armed.

“As a result I grasped the intruder firmly in order to remove her from the room as swiftly as possible.”

He added that he “deeply” regretted the incident and would co-operate fully with a Cabinet Office investigation.

Sir Peter said: “The woman clearly was trying to create a fuss. Most viewers would say it’s good that she didn’t succeed.”

But Labour’s shadow women and equalities secretary Dawn Butler described the incident as “horrific” and said “so much violence does not seem justified”.

She added: “I’m sure I’m not the only one who is wondering why no one intervened. So much violence does not seem justified. An investigation needs to take place as soon as possible.”

A City of London Police spokesman said: “We have received a small number of third party reports of an assault taking place at the event. These reports are being looked into by police.”

The City of London Corporation said it was investigating the breach of security at Mansion House and “will be reviewing arrangements for future events”.

In his ministerial role, Mr Field has spoken up for the rights of protesters and condemned violence against women. – PA