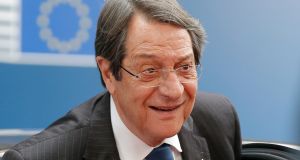 The European Council’s willingness to contemplate measures against Turkey over its illegal drilling for natural gas off the coast of Cyprus has been met by defiance from Ankara.

At the EU leaders’ summit in Brussels, the council said it would “monitor developments” and be “ready to respond in full solidarity with Cyprus” by adopting “targeted measures”.

European Commission president Jean-Claude Juncker stated, “What Turkey is doing in the territorial waters of Cyprus is totally unacceptable.” He said the measures to be taken would “not be soft”.

Turkish president Recep Tayyip Erdogan responded, “Turkey will continue to defend the interests of the [Turkish Cypriots] along with its own interests.”

Cyprus president Nicos Anastasiades expressed “utmost satisfaction” over the EU stand. Government spokesman Prodromos Prodromou noted for “the first time” that the EU has decided an “unlawful act against a member [will] have particular consequences”.

The council said the commission and the European External Action Service – the EU’s foreign and security policy service – had been asked to submit “options for appropriate measures without delay”.

Ahead of the EU leaders’ meetings on Thursday and Friday, Greek prime minister Alexis Tsipras warned that Turkey had also threatened to drill off the Aegean island Kastellorizo, thereby risking a Greek military response.

France, Italy and the US have major interests in Cypriot natural gas. A consortium including France’s Total and Italy’s Eni energy companies has a strong presence in Cyprus’s economic zone.

The US has expressed concern that an agreement reached between Cyprus, US-based Noble Energy, Israel’s Dalek and Royal Dutch Shell could be at risk and could scupper a second deal between Cyprus, Greece and Israel for a pipeline which would supply gas to Europe.

Turkey has challenged gas exploitation in Cypriot waters by foreign firms under agreements with the Cyprus republic and argued that Turkey, along with the Turkish Cypriots, has the right to exploit hydrocarbons in the eastern Mediterranean. Under the 1960 treaty of guarantee reached by Turkey, Greece and Britain before Cyprus became independent, Ankara argues it has the right to protect Turkish Cypriots.

In 1974, Turkey occupied the northern third of the island after the Greek military junta mounted a coup against the Cypriot government. In 1983, the Turkish Cypriots declared independence which is recognised only by Ankara.

In early May, Turkey dispatched the drill ship Fatih to the sea off the port of Paphos. Turkey’s energy minister Fatih Donmez this week announced Fatih has drilled to a depth of 3,000m. “The drilling is to reach 5,000-5,500m”, which could be achieved by the end of July, he said.

As EU leaders met, Turkey defiantly deployed a second ship, Yavuz, which is to begin drilling early next month off the northwest coast of Cyprus. After Cyprus issued arrest warrants for Fatih crew members, Erdogan said Turkey’s ships would “resolutely” continue surveys in the region.

Turkish Cypriot prime minister Ersin Tatar has said neither Turkey nor the breakaway state would be intimidated by EU measures and accused the Cyprus republic and its supporters of “trying to exclude Turkey from the region. They dream of usurping our rights.”

Turkey has vowed to block the republic’s exploitation of the island’s gas reserves until the government agrees to Turkey’s terms for a peace deal and gives Turkish Cypriots a share of revenues.