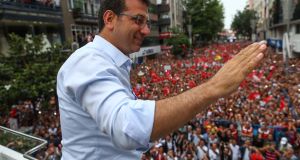 Millions of voters in Istanbul go back to the polls for a controversial mayoral election re-run on Sunday, as President Recep Tayyip Erdogan’s party tries to wrest back control of Turkey’s largest city.

The high-profile vote is taking place because Turkey’s top election authority ruled in favour of Mr Erdogan’s Justice and Development Party, AKP, and cancelled the result of the March 31st vote for mayor of Istanbul, which had given a narrow victory to opposition candidate Ekrem Imamoglu.

The decision cited a breach of laws concerning the composition of officials overseeing the vote. It fuelled concerns over democracy and the rule of law in Turkey.

The race for Istanbul is seen as a test of Mr Erdogan’s popularity amid a sharp economic downturn, rising unemployment and high food prices.

To its critics, the Islamic-based AKP is entering the election with its democratic credentials dented for triggering the repeat vote.

The election is important because the city of 15 million, straddling Europe and Asia, is Turkey’s financial, commercial and cultural centre, with a budget worth $8.8 billion last year.

“It’s very risky for any political party to lose Istanbul,” said Can Selcuki, general manager of the Istanbul Economics Research think tank. “The budget of Istanbul is larger than some sovereign GDPs of small countries.”

The loss of Istanbul in March was a blow to Mr Erdogan’s 25-year dominance of the city as mayor and backer.

He was born in the city and began his political career as mayor. He once famously said: “Whoever wins Istanbul wins the whole of Turkey.”

Mr Erdogan has dominated Turkish politics for the past 16 years, but a loss could put him on shaky political ground.

The two men have openly criticised AKP for seeking a re-run of the Istanbul vote. “The re-run decision . . . definitely made the cracks within the AKP more visible,” Mr Selcuki said.

“If Mr Imamoglu wins, it’s likely those cracks will become even more visible.”

Opinion polls suggest Mr Imamoglu, of the secular centre-left Republican People’s Party, has a slight lead over his rival, the AKP’s candidate Binali Yildirim, who is a former prime minister, transport minister and parliament speaker.

Mr Imamoglu, who was mayor for just 18 days before his win was cancelled, has cast the election as a battle for democracy, insisting his victory was unfairly seized.

He said: “I believe the people of Istanbul will give the necessary response to this injustice at the polls as a result of their belief in democracy.” – AP