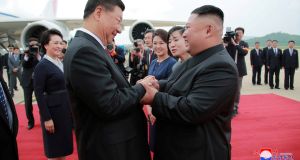 Chinese president Xi Jinping has promised to play an active role in the denuclearisation of the Korean peninsula and offered to help with “security and development”.

Mr Xi – who was making the first visit to North Korea by a Chinese leader in 14 years – and his North Korean counterpart Kim Jong-un agreed to have close strategic communication and to deepen co-operation in the face of a “serious and complicated” international environment, North Korea’s KCNA news agency said on Friday.

“We must take a long term and highly strategic approach to moving the situation towards resolution,” Mr Xi said.

“China is willing, within the bounds of what is possible, to work with North Korea to assist in resolving its reasonable concerns over security and development,” he added.

Mr Xi’s landmark visit to Pyongyang comes against the backdrop of frosty relations between the US and North Korea following the collapse of Mr Kim’s second nuclear summit with US president Donald Trump in February and ahead of a planned meeting between Mr Trump and Mr Xi next week at the G20 summit in Osaka.

Kim Jae-chun, professor of international relations at Sogang University and a former government adviser, said Mr Kim may expect Mr Xi to deliver his message to Mr Trump at the G20.

“Kim may try to [tell] Trump that he wants to resume working-level talks or set up a third summit with Trump, without agreeing to a big deal demanded by the US,” he said.

North Korean media gave heavy coverage to Mr Xi’s visit, with the state-controlled Rodong Sinmun newspaper devoting eight of its 10 pages on Friday. The newspaper said the two leaders watched a performance, entitled Invincible Socialism, that had been “specially prepared” for the Chinese delegation.

Their meeting comes at a tense juncture for Pyongyang and Washington which remain far apart over how to dismantle North Korea’s nuclear programme – the talks in Hanoi collapsed after the US refused to agree to a gradual removal of sanctions in return for steps towards denuclearisation – and at a time when China and the US are locked in a fierce trade war.

Mr Kim said on Thursday that North Korea was awaiting a response from the US to revive nuclear talks. Mr Trump said earlier this month he had received a “beautiful’ letter from Mr Kim.

While Mr Trump welcomed the letter, which included birthday congratulations from Mr Kim, there have been no significant contacts between US and North Korean negotiators since the Hanoi summit.

US officials have said North Korea was effectively not responding to outreach. However, Mr Kim told Mr Xi that it was Washington that hadn’t responded.

“For more than a year, North Korea has taken a lot of proactive steps to avoid tensions and manage the situation on the peninsula, but the relevant parties have not responded proactively; this is something North Korea does not want to see,” Mr Kim told Mr Xi on Thursday, according to China’s state-run CCTV network.

Mr Trump has tried to maintain a positive spin on the situation, and took a much softer line than his officials when North Korea launched several short-range ballistic missiles last month for the first time since 2017.

In comments this month that sparked criticism, Mr Trump said the CIA would never have been allowed to recruit Kim Jong-nam, the assassinated half-brother of Kim Jong-un, after reports that Kim Jong-nam had been giving US intelligence information on the North Korean regime. – Copyright The Financial Times Limited 2019