The visit of a Russian MP to Georgia has sparked violent clashes in Tbilisi, with scores of people injured after protesters attempted to storm the parliament building. Video: Reuters 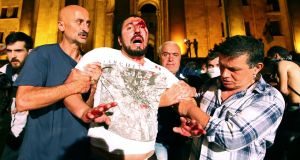 Opposition demonstrators help a wounded man during a protest outside the Georgian parliament in the early hours of Friday. Photograph: Zurab Tsertsvadze/AP 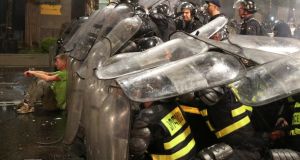 A protester sits on the ground next to riot policemen near the Georgian parliament in Tbilisi. Photograph: Irakli Gedenidze/Reuters

Georgians protested again on Friday after earlier trying to storm their parliament to stop a visit by a deputy from Russia, which defeated the pro-western Black Sea state in a 2008 war and backs two separatist-run regions of the country.

More than 240 people were injured on Thursday night when riot police used rubber bullets, tear gas and water cannon to disperse protesters who were enraged by the sight of a Russian politician occupying the speaker’s chair in Georgia’s parliament in Tbilisi.

Sergei Gavrilov, from Russia’s Communist Party, was addressing a forum of Orthodox Christian deputies from around Europe, and insisted later that he sat in the speaker’s chair at the invitation of his Georgian hosts.

Mr Gavrilov and other delegates were ushered out as Georgian opposition deputies blocked the speaker’s rostrum and demanded high-level government resignations, as outside parliament about 10,000 people tried to force their way in, while waving Georgian and European Union flags and denouncing Moscow.

“Russia is our enemy and occupier. The fifth column it manages [in Georgia] may be more dangerous than open aggression,” Georgian president Salome Zurabishvili wrote on Facebook after the clashes between protesters and police.

She said later the government had failed in its duties by allowing an event in parliament that “caused grave offence to our society and triggered national protest”.

Without specifying who she believes is behind the incident, Ms Zurabishvili added: “The goals of those people, who seek escalation and destabilisation, are quite clear: through anti-constitutional and anti-state actions, they aim to implement Russia’s ... plan of splitting Georgian society, weakening and enslaving the state and undermining the foundation of our country’s independence.”

The speaker of Georgia’s parliament, Irakli Kobakhidze, stepped down on Friday, but opposition parties demanded also the resignation of the interior minister, talks on snap elections and the release of all detained protesters.

Leading members of the ruling Georgian Dream party said they understood the public’s anger but accused opposition parties of fomenting violence and chaos, noting that some protesters had hurled rocks and bottles at police, grabbed their shields and ripped off their helmets.

Bidzina Ivanishvili, the country’s richest oligarch and chairman of Georgian Dream, said he “fully shares the sincere outrage of the Georgian citizens”.

“It is unacceptable that a representative of the occupier country chairs a forum in the Georgian parliament,” he said.

Since the early 1990s, Russia has backed separatists who control the Georgian regions of South Ossetia and Abkhazia, and in 2008 it crushed Tbilisi’s forces in a five-day war when fighting erupted over South Ossetia. Moscow then recognised both provinces as independent states and keeps thousands of troops in each region, effectively turning them into Russian protectorates.

“Everything that happened yesterday in Georgia was nothing more than a Russophobic provocation,” Kremlin spokesman Dmitry Peskov said on Friday.

“Of course, we cannot but be extremely concerned by the fact that there were aggressive acts towards Russian citizens. Let’s not forget that Georgia is a country that quite a lot of tourists from Russia regularly visit. It’s an extremely serious issue.”