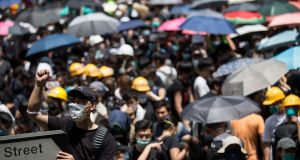 Tensions escalated in Hong Kong on Friday night as thousands of mainly student protesters angry at a proposed extradition Bill laid siege to the police headquarters, barricading the 12 entrances to the complex and blocking all the main thoroughfares in the area.

Inside the police headquarters hundreds of officers lined up behind the main gates and protected themselves with shields as eggs were thrown over the walls. A banner taped to the egg-spattered wall read: “Never give in”.

Student groups had vowed to escalate their actions if authorities did not respond to their demands by Thursday evening. Aside from the scrapping of the bill, the protesters also called for chief executive Carrie Lam’s resignation, the release of people arrested during clashes with police last week, and an investigation into alleged excessive use of force by the police.

They are also calling on the government to retract the characterisation of the protesters as “rioters”, an offence that can carry prison sentences of up to 10 years in the city.

Earlier on Friday the protesters had surrounded several government buildings, and the legislature cancelled all meetings.

On Friday night a police spokesman said there were more than 4,000 anti-riot officers in the headquarters and surrounding areas and they were ready to deploy to combat any unrest or violence. He said they had no plans to disperse protesters unless they stormed police lines.

The anti-extradition protests and rallies have largely been organic and leaderless exercises. Students say this is a tactic as they want to avoid any of the distracting conflicts that arose between some groups and leaders during the 2014 pro-democracy Umbrella Movement, and also because in the aftermath of that three-month protest the government charged more than 100 of the leaders with criminal offences.

Many of the protesters communicate on the encrypted messaging system Telegram, and the range of diverse opinions can be clearly seen. Late on Friday night a few activists were calling on their fellow protesters to storm the police barracks, while most were urging a more sustained and peaceful approach.

The massive outcry at the Bill, which could see Hong Kongers extradited to mainland China to face trials in the Communist Party’s opaque judicial system, drew millions of people on to the streets in recent weeks in the biggest political crisis to rock the financial and trade hub since the 1997 handover when Britain transferred sovereignty back to China.

Under overwhelming public pressure, Ms Lam suspended the Bill last weekend and apologised to the people for her poor handling of the matter, but she refused to withdraw it fully and to resign. Her actions did nothing to mollify the protesters who immediately pledged to intensify their campaign.

Pro-democracy legislator Claudia Mo said Ms Lam must step down, and warned that the cycles of protest would continue until there was true political reform in Hong Kong.

“Carrie Lam is behaving like a tin-pot dictator, and we are seeing more and more authoritarianism,” she told The Irish Times. “As long as Beijing selects candidates to run Hong Kong these protests will keep happening.”

Hong Kong people had now realised it was the political structure that was the fundamental issue, she said. “We see increasing political controls in Hong Kong. There is widespread censorship and self-censorship. We have to fight for the future of Hong Kong.”

Wearing black clothes and surgical masks to hide their identities, the protesters jeered at the police inside the compound on Friday night, denounced police brutality and demanded that jailed protesters be released.

Amnesty International said it had verified evidence of police violence during a protest on June 12th, including footage of officers beating subdued protesters and the firing of rubber bullets at people’s heads. Hong Kong’s Bar Association has called for an investigation into the police’s guidelines on use of force against protesters.

The police have kept a low profile since the June 12th protest, when they were widely criticised for firing rubber bullets and more than 150 canisters of tear gas at the protesters.

Eager to avoid inciting further public anger at this point, Legislative Council president Andrew Leung said on Friday that lawmakers would not be pushing forward another controversial Bill in this legislative year relating to the national anthem.

Under the national anthem bill put forward by the government earlier this year, anyone who performs or sings the anthem in a derogatory manner, or insults it in any way, could face up to three years in prison.

“The legislature needs some time to calm down,” he said, postponing a second reading of the contentious Bill.