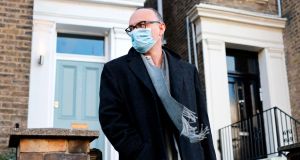 The drama surrounding Boris Johnson’s advisers in Downing Street is not so much an episode of The West Wing as of The Tudors, with the king’s consort plotting against his favourite. But the war for Johnson’s ear that saw his director of communications Lee Cain resign on Wednesday night is at its heart a struggle over the government’s political direction.

The role of Johnson’s fiancee Carrie Symonds adds spice to the story of Cain’s downfall after a number of years as the prime minister’s most loyal and effective aide. But Symonds, a former director of communications for the Conservative Party, is an accomplished political operator with a deep network of allies in the party and in the right-leaning press.

Cain’s trouble began when he came up with the idea of introducing daily, televised, White House-style press briefings to replace one of two daily off-camera briefings for Westminster lobby reporters. Whoever fronted such a daily briefing would be the face of the government and one of the most important political figures in the country.

Johnson chose for the role former Guardian and ITV News journalist Allegra Stratton, who has helped to burnish chancellor of the exchequer Rishi Sunak’s image and to make him the most popular member of the government. Cain opposed the appointment and sought to prevent Stratton from having direct access to the prime minister.

Johnson sought to defuse the row by offering Cain the role of chief of staff, a move backed by chief adviser Dominic Cummings to guarantee that his Vote Leave crew would remain in control of the Downing Street operation.

Reports that Cain was about to get the job unleashed a furious backlash from Conservative MPs who resent the dominant position of Cummings and his allies. Symonds opposed the appointment too, favouring a shift away from the combative style employed by Cain, who briefed aggressively against ministers and MPs and imposed boycotts on media organisations he viewed as hostile. Johnson apparently subsequently rescinded the offer.

Now that Johnson has seemingly defied Cummings over two appointments, Stratton’s and Cain’s, speculation has grown over the chief adviser’s own future. Cummings and his Vote Leave crew are loyal to one another and their shared project rather than to Johnson, the government or the Conservative Party.

With about a week to go in talks about a post-Brexit trade deal with the EU, Cummings and Brexit adviser Oliver Lewis were reported to have threatened to resign. There were even reports that Britain’s chief negotiator in the EU talks David Frost was about to abandon his post out of loyalty to Cain, although these were quickly denied by Downing Street.

Cummings remains in his position for now but his grip on the Downing Street operation is weakening and a new faction surrounding Johnson will push him away from the national populism of the Vote Leave campaign.