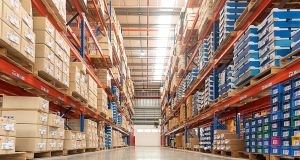 Warehouse space let in the Republic rose 50 per cent in the third quarter from the second. Photograph: iStock

Large UK food and drink companies supplying the Republic are racing to secure extra storage space as the risk of a no-deal Brexit at the end of December threatens their supply chains.

Stafford Lynch, a Dublin-based distributor of large brands including Tetley Tea and Wilkinson Sword razors, says it is fielding such demand from major UK companies and brands wanting to stockpile products that it will have exhausted its own warehouse capacity by December.

The company’s chief executive Conor Whelan said space in Dublin will likely be at a premium until “greater clarity emerges” on Brexit.

Warehouse space let in the Republic rose 50 per cent in the third quarter from the second, “undoubtedly boosted by Brexit,” said Garrett McClean, executive director of industrial and logistics at global property consultancy CBRE Group.

“We all have Brexit fatigue but it is now very close on the horizon and for many businesses already struggling to cope with the pandemic, Brexit is adding to their supply chain challenges,” he said. “The timing of it all couldn’t be worse.”

The warehouse pressure is among several stresses being felt across the supply chains of larger British companies. Marks & Spencer, Rowse Honey and Harvey Nichols, are among companies that have recently applied to the UK’s HM Revenue and Customs for a licence to import and export without paying tariffs, or converted existing space into a so-called bonded or customs warehouse.

Without a trade deal, British companies reliant on business with the European Union face the prospect of tariffs on goods shipments and additional paperwork that could create delays at border entry ports. By storing imports in a bonded facility, firms can delay paying customs charges until the goods are sold. They may avoid duties completely if an imported product, such as a car part, is processed and then exported from the UK, perhaps in a finished vehicle.

“The reality has been that companies have been waiting too long because they’ve bought into the belief that a deal will mean that things just carry on as before,” said Clive Brady, chairman of the Bonded Warehousekeepers Association in Britain. “It’s only now, with just days to go before the end of the transition period that companies are scrambling to get things done.”

Harvey Nichols, the luxury department store, has taken the precautionary measure of converting some of its existing warehousing capacity to bonded space to ensure it is prepared for any disruption, a spokeswoman said. The system for tracking goods subject to duties is mostly monitored electronically, which allows a warehouse to hold both bonded and non-bonded stock.

Marks & Spencer, which in more than 100 years of trading has never applied to HMRC for duty relief on inbound clothing and home goods, said last week it has established a customs warehouse to mitigate any potential customs costs.

The retailer receives supplies from all over the world, some of which are then moved to its stores on the continent and could attract duty from January. A spokesman said it had taken the decision not only because of Brexit but because it was a more efficient way of running a business with a large international arm.

Rowse Honey, owned by Irish-based Valeo Foods, is the UK’s biggest seller of honey. It imports barrels of it from all over the world to be blended at its UK production facilities into its well-known squeezy bottles.

From January any EU sales may attract a duty. However the company has recently applied to HMRC for a customs facility, sources said. A spokesman from Valeo declined to comment.

UK and EU negotiators have set a November 15th deadline for reaching a trade agreement, to give the bloc’s parliaments time to ratify a deal. The tight schedule is forcing many British companies to trigger contingency plans.– Bloomberg