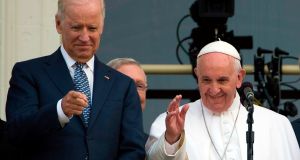 File image from September 24th, 2015, of Pope Francis with then US vice-president Joe Biden, on a balcony at the US Capitol. Photograph: Andrew Caballero-Reynolds/AFP via Getty Images

US president-elect Joe Biden has pressed ahead with his transition plans, appointing a new chief of staff and holding a congratulatory phone call with Pope Francis on Thursday, despite president Donald Trump’s refusal to accept the presidential election result.

Mr Biden, who will be the first Catholic US president since John F Kennedy, spoke to the pontiff on Thursday. The two men discussed climate change, immigration and measures to help the poor, according to a readout from the Biden campaign.

“The president-elect thanked His Holiness for extending blessings and congratulations and noted his appreciation for His Holiness’s leadership in promoting peace, reconciliation, and the common bonds of humanity around the world,” the statement said.

The president-elect is continuing to work on his transition plans from his home in Delaware, as he prepares to assume the presidency on January 20th.

He announced that Ron Klain will become White House chief of staff – one of the most senior jobs in government. Mr Klain, who served as Mr Biden’s chief of staff during the first term of his vice-presidency, has been a long-time aide to Mr Biden since his time in the Senate. He also played a central role in dealing with the Ebola health crisis during the Obama years.

“Ron has been invaluable to me over the many years that we have worked together, including as we rescued the American economy from one of the worst downturns in our history in 2009 and later overcame a daunting public health emergency in 2014,” Mr Biden said in a statement.

The president-elect is expected to name more appointees in the coming days, though an announcement on cabinet members will come later.

Mr Biden is focusing much of his attention on the coronavirus pandemic, announcing an advisory board on the issue earlier this week. On Thursday, a member of the board, epidemiologist Michael Osterholm, raised the prospect of a national lockdown for four to six weeks in the US, as a way of controlling the country’s rising infection rates.

However, top immunologist Dr Anthony Fauci said a lockdown was not inevitable. The US recorded a new high of more than 145,000 new coronavirus cases on Wednesday, a week after it recorded a daily figure of more than 100,000 new cases, which was then a record number.