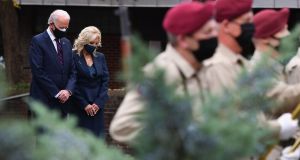 US president-elect Joe Biden and his wife Jill Biden: World leaders have phoned him to offer congratulations on his election win. Photograph: Angela Weiss/AFP

Senior Democrats have lambasted Donald Trump’s refusal to accept the results of the US presidential election, accusing him of undermining American democracy.

At a press conference on Capitol Hill, House speaker Nancy Pelosi said Republicans, who have mostly backed Mr Trump’s claims that the election is not over, were “refusing to accept reality”, noting the sharp rise in coronavirus cases in the country.

Senate minority leader Chuck Schumer said Republicans were “deliberately casting doubt on our election for no other reason than fear of Donald Trump”.

Stating that America was facing a “moment of great national challenge”, he said: “We just had a divisive and hard-fought presidential election but instead of working to pull the country back together so we can fight our common enemy, Covid-19, Republicans in Congress are spreading conspiracy theories, denying reality and poisoning the well of our democracy.”

Mr Trump is refusing to accept that his Democratic opponent, Joe Biden, has won the election, even though the president-elect has built up a virtually unsurpassable lead in a handful of swing states that determined the election outcome.  World leaders have phoned Mr Biden to offer congratulations, but Republicans are insisting that the election result is not finalised. Mr Trump would need, through lawsuits and recounts, to overturn the results in multiple states in order to win the election, a scenario that appears to be mathematically impossible.

The president continued to tweet unfounded theories about the election on Thursday, leading Twitter to flag several of his posts. “Rigged election!” he wrote in one tweet, while claiming in another that he would win Arizona.

“This claim about election fraud is disputed,” Twitter wrote in a message attached to a tweet he wrote claiming that voting machines “deleted 2.7 million Trump votes nationwide”.

However, there were some signs that Republican senators were beginning to break with Mr Trump. Senators Lindsey Graham and Chuck Grassley said on Thursday that they believed Mr Biden should be given access to classified documents during the transition period.

So far the General Services Administration (GSA) – the arm of the federal government responsible for handling the presidential transition – has not handed over resources, funding or contacts to the incoming president. The head of the department, Trump appointee Emily Murphy, has refused to declare the winner of the election.

Criticism of the political stand-off in the United States continued on Thursday.

In a statement, the Elders, a group of global leaders headed by former president Mary Robinson, expressed “deep concern about US president Donald Trump’s refusal to adhere to the protocols and processes governing the transition of power, as putting at risk the functioning of American democracy”.

“It is shocking to have to raise concerns about US democratic processes as the Elders have previously commented on volatile and undemocratic situations in states such as Kenya, Sri Lanka and Zimbabwe, ” Mrs Robinson said.

Meanwhile, Corey Lewandowski, a Trump adviser who attended last Saturday’s press conference outside a gardening centre in Philadelphia with the president’s lawyer Rudy Giuliani, has tested positive for coronavirus – the latest member of Mr Trump’s circle to contract Covid-19.