North will not be ready for post-Brexit trade checks – watchdog 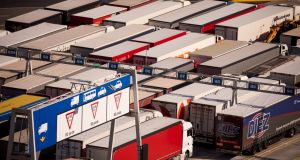 British ministers have warned that 7,000 trucks could be held in queues if traders are not ready for Brexit. Photograph: Jason Alden/Bloomberg

Northern Ireland will not be ready to conduct checks on certain goods moving between it and Britain from January as required by the Brexit divorce deal and is exploring contingency plans, an official report warned on Friday.

The National Audit Office (NAO), which reviews UK government spending, added that all UK borders would face widespread disruption when Britain finally leaves the European Union after Covid-19 hits its preparation, whether or not it strikes a free trade deal with the bloc.

From January 1st, UK exporters will need to file customs and safety declarations, even if Britain does secure an agreement. However, the NAO said ports now have little time to integrate or test their systems with the government’s new IT services, and there are still not enough customs sites or customs brokers to help industry adapt.

“Disruption is likely and government will need to respond quickly to minimise the impact,” said NAO chief Gareth Davies.

One of the most challenging areas will be Northern Ireland which will require some goods from the rest of the UK to be checked in order to protect trade with the Republic.

The NAO said the Department of Agriculture, Environment and Rural Affairs which is responsible for the systems and infrastructure to undertake checks on animals and plants had been “severely hampered” by the ongoing trade talks with Brussels and a “lack of clarity” over the measures required. It now believes the work will not be ready in time.

The report added that the customs office has made good progress on the issue but acknowledges that it remains “very high risk”.

“It is in the process of identifying alternatives if it cannot put its plans in place by January 1st, 2021,” it said.

With less than two months to go, the NAO said key IT systems had yet to be tested and transit areas for lorries were not ready. It added that the London government had still not taken the steps required to ensure there were enough customs agents, seen as “vital” to the smooth working of the system.

At the same time, civil contingency plans to maintain the supply of medicines and other critical goods – including acquiring extra freight capacity away from the main Channel crossings – were proving more difficult to enact due to the pandemic.

The watchdog also said London had left itself little time to mobilise its new trader support service, which is designed to help businesses moving goods between Britain and Northern Ireland. This meant there was a “high risk” traders would still not be ready when the new arrangements kick in.

Another area of concern involves a key government plan for moving goods in one transit movement across several EU countries which many trucking companies are expecting to use. The report said it would be challenging to deliver this.

It added that HMRC the British tax office, still needed to make significant changes to its customs systems to handle the increase to an expected 270 million customs declarations a year, even though it had known this was likely to be necessary since planning for a no-deal Brexit began in 2017.

Labour MP Meg Hillier, chairwoman of the public accounts committee, said: “The government simply hasn’t given businesses enough time to prepare. And a huge amount still needs to be done to implement the Northern Ireland protocol.

“It’s incredibly worrying that, with two months to go, critical computer systems haven’t been properly tested. The government can only hope that everything comes together on the day but this is not certain.

Mr Davies said: “The January 1st deadline is unlike any previous EU exit deadline: significant changes at the border will take place and government must be ready.

In its defence, the government says it has given £84 million to train customs intermediaries, phase in paperwork demands for imports and boosted logistics for critical goods. It was also investing £705 million in border infrastructure, staffing and technology, a spokesman said.

However, it also warns that 7,000 trucks could be held in queues in Kent, southeast England, if traders are not ready.

The Bank of England said on Thursday that GDP was likely to suffer a 1 per cent hit from the trade changes, even if a deal were secured. – Reuters