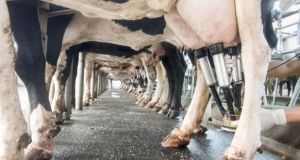 Ireland’s food trade with the UK is facing a triple threat from Brexit, Covid-19 and waning UK consumer confidence, Bord Bia has warned.

The agency said Irish food exports to the UK, the Republic’s main food-export market, have already declined 6 per cent this year as a result of the pandemic.

It said this could get a lot worse if the recession there is prolonged, and if the EU and the UK fail to agree a free-trade deal.

As Brexit negotiations enter the final stages, Bord Bia and the Department of Agriculture on Thursday began a two-day virtual trade mission to Britain in a bid to safeguard food and drink exports, worth €4.5 billion annually to the Irish economy.

Irish officials are scheduled to meet with key UK retailers and food-service suppliers including Asda, Sainsbury’s, Starbucks, McDonald’s and Deliveroo.

Bord Bia chief executive Tara McCarthy said the impending Brexit deadline had already prompted the stockpiling of various Irish food products in the UK as suppliers and retailers try to insulate their businesses against future disruption.

While a no-deal Brexit and tariffs presented a negative outlook for the food industry here, she said the UK relied on food imports and UK consumers put a high premium on quality and traceability which played to Irish strengths.

The pandemic had made consumers doubly focused on the origins of the food they buy, she said.

According to a recent report by the London School of Economics, up to one-third of the State’s food exports could be knocked out if the EU and the UK fail to reach a deal and tariffs are imposed.

However, it also pointed to a stark dip in UK consumer confidence, with consumers expressing concern about the economic outlook and the cost of living as the UK began a second lockdown to curb the spread of coronavirus.

“This trade mission is part of Ireland’s strategy to defend the place of Irish food produce on British shelves in the face of impending and profound Brexit impacts,” Ms McCarthy said.

“We are preparing our industry for a new world and there is no doubt that we can, and will, find our way in a post-Brexit Britain,” she said.

Minister for Agriculture Charlie McConalogue said: “Our future trading relationship with Britain will change from January 1st, even in the most benign Brexit scenario. Therefore, I am acutely aware that Ireland needs to continue to differentiate our food and drink offering in this valuable export market.”