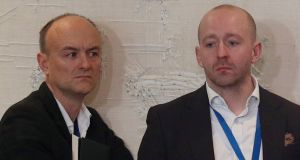 Conservative MPs have welcomed the resignation of Lee Cain as Boris Johnson’s director of communications amid doubts about the future of the prime minister’s chief adviser, Dominic Cummings. Mr Cain resigned on Wednesday night after Mr Johnson apparently rescinded an offer to him of the position of Downing Street chief of staff.

“The departure of Lee Cain does show, I think, that the PM is taking back control of his government,” said former minister Jake Berry. “He’s moving from a campaigning operation to an operation solely focused on good government.”

Mr Cain, a former journalist, was head of broadcast for the Vote Leave campaign in 2016, worked for Mr Johnson when he was foreign secretary and helped to manage his campaign for the Conservative leadership last year. He was a key figure in the group of Vote Leave campaign veterans around Mr Cummings, and his departure has led to speculation about a wider shake-up in Downing Street.

Senior Conservative backbencher Roger Gale said the government should be focusing on coronavirus and Brexit rather than infighting, but he said a new chief of staff could put Mr Johnson’s administration back on the rails.

“The government, and Downing Street particularly, should be concentrating all of its efforts on the pandemic and on the end game of Brexit, and frankly this is a distraction that cannot and should not be allowed to take place, and the prime minister has got to get a grip on it,” he said.

“For my money Cummings is a liability, and what the prime minister needs and deserves is a first-rate chief of staff who is a serious heavyweight. I think the expression currently in use is ‘big boy pants’.”

Mr Cain’s resignation followed reports that he was unhappy about the appointment of former Guardian and ITV News journalist Allegra Stratton as Mr Johnson’s press secretary and the face of daily televised press conferences starting in the new year. When it emerged on Tuesday night that Mr Johnson had offered Mr Cain the job of chief of staff, the prime minister’s fiancee, Carrie Symonds, was among those who opposed the appointment.

When Mr Johnson withdrew the offer on Wednesday night, Mr Cain said he would leave his position at the end of the year. He will be succeeded as director of communications by James Slack, currently the prime minister’s official spokesman, who will fulfil the role as a civil servant.

Amid reports that Mr Cummings, Brexit chief negotiator David Frost and Brexit adviser Oliver Lewis were on the verge of resigning in solidarity with Mr Cain, Labour leader Keir Starmer described the situation in Downing Street as pathetic.