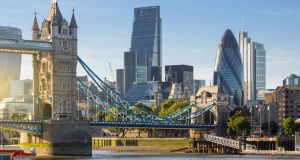 City of London: an equivalence decision would be a declaration that supervision and regulations in the UK are effectively as good as those of the EU. Photograph: iStock

The European Union has warned that it still does not have enough information about Britain’s future policy direction to grant regulatory equivalence on financial services, raising the prospect of a deep blow for the City of London.

An equivalence decision would be a declaration that supervision and regulations in the UK are effectively as good as those of the EU. Without one, British-based financial firms would have to deal with the regulatory authorities of each EU country separately to serve European clients.

A senior EU official said that clarity was needed from the UK about what its regulatory regime for the financial industry would look like in the future in order to make the move, as there was concern that the British government intended to diverge from the current status quo.

“Our concern is where we go from here . . . They talk about ripping up rule books and taking back control and independent coastal states,” the official said.

“When both sides get some sense of where we’re going to end up, then we’ll know whether we’ll be able to give equivalence, and equivalence that is stable because remember we’re expecting companies to invest hundreds of millions of euro based on this equivalence decision,” the official added.

“We’re not politicising equivalence, we’re simply looking for a basis in which we can give equivalence in a stable way. That’s what the City of London wants by the way, not just us.”

Earlier this week, the British government announced it would grant equivalency to allow EU-based exchanges, clearing houses and financial benchmarks to continue to be used by customers in the UK. Decisions on the full range of financial services activities are still pending.

The EU Commission did not reciprocate the UK’s move. A commission spokesman said that equivalence decisions were “autonomous” and would be taken “where they are in the EU’s interests”.

“When you don’t have equivalence you fall back on national regimes. So it’s not that everything stops but it means for the providers of those services they can no longer get one authorisation and get it to the whole of the EU. They have to deal with the French, the Germans, the Swedes, the Lithuanians, all these national regimes. It’s going to be disruptive,” the EU official said.

“The financial institutions are used to a world where not only did they have equivalence, they had the passport,” the official added, in a reference to the ability to do business across the EU after being authorised in one state. This arrangement is coming to an end on December 31st, leading many financial institutions to establish EU bases.

The equivalence decisions are separate to the negotiations between the EU and London on their future trade relations, which are due to drag into next week after talks in London did not reach a resolution. Time is tight to clinch an accord that would avoid an economically damaging switch to default trade terms on January 1st, with some warning next week is the last moment for a breakthrough.