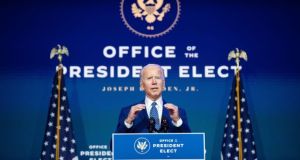 More Republicans on Thursday broke with President Donald Trump’s refusal to cooperate with Joe Biden, saying Mr Biden is entitled to intelligence briefings even if they were not ready to recognise the Democrat as the winner of the November 3rd election.

Most Republican officials and lawmakers publicly remained behind the Trump campaign’s push to contest the result through lawsuits challenging vote counts in individual states as the president, without evidence, claims widespread voting fraud.

Mr Biden, meanwhile, moved ahead with the work of preparing to govern, speaking with Pope Francis as his fellow Democrats in Congress blasted Republican election “shenanigans” and urged action on the coronavirus pandemic.

With a few states still counting ballots, Mr Biden has won enough of election battleground states to surpass the 270 electoral votes needed in the state-by-state electoral college that determines the next president. Mr Biden is also winning the popular vote by more than 5.2 million votes, or 3.4 percentage points.

The president-elect traditionally receives such briefings from the intelligence community to learn of threats facing the United States before taking office.

“I don’t see it as a high-risk proposition. I just think it’s part of the transition. And, uh, if in fact he does win in the end, I think they need to be able to hit the ground running,” Mr Cornyn told reporters. He refused to acknowledge that Mr Biden had won, however.

When reporters asked Mr Graham, a vocal Trump defender, if the briefings should proceed, he responded, “I think so, yeah.”

The two top Democrats in Congress - House of Representatives speaker Nancy Pelosi and Senate Democratic leader Chuck Schumer – on Thursday urged Republicans to join them in passing legislation to address the pandemic and buttress the battered economy.

“The Republicans should stop their shenanigans about an election that President Trump has already lost and focus their attention on the immediate issue at hand - providing relief to a country living through the Covid health and economic crisis,” Mr Schumer said.

Ms Pelosi said Mr Biden, who has spent five decades in public life as a senator and vice president, “knows the territory” and will be “just fine” in the transition.” But she added: “It’s most unfortunate that the Republicans have decided that they will not respect the will of the people.”

Mr Biden, who is set to become the first Catholic US president since John Kennedy in the 1960s, spoke with the Pope on Thursday, thanking him for his “blessing and congratulations,” his transition team said.

Mr Biden told the pontiff he wanted to work together on issues including caring for the poor, addressing climate change, and welcoming immigrants and refugees, it said.

Mr Biden has focused on planning his administration, with attention expected to shift to his selections for key Cabinet posts ahead of taking office. His team said Mr Biden was meeting with transition advisers on Thursday in Delaware.

He named longtime adviser Ron Klain on Wednesday as White House chief of staff, his first major appointment. Mr Klain is expected to take a leading role in Mr Biden’s response to the intensifying pandemic that has killed about 242,000 Americans, with a record 142,000 new Covid-19 cases registered on Wednesday. – Reuters