Brexit: EU27 defers decision on length of extension until next week

Britain's prime minister Boris Johnson says that he is asking parliament to approve a national election to take place on December 12th as part of his efforts to ensure Britain leaves the European Union. Video: Reuters 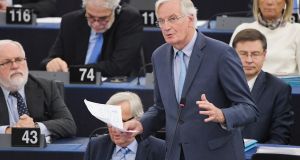 EU ambassadors have postponed a decision on a British Brexit extension until next Monday or Tuesday.

They have decided, however, not to convene another special summit to make the decision which will be taken by written procedure.

The decision will put pressure on the British Labour Party to vote for a general election when the issue is debated in the Commons on Monday. The party has been deferring a decision until an EU decision on how long an extension may be, but Brussels is saying implicitly now that the decision on duration will depend on a guarantee that an election will be held.

President of the European Council Donald Tusk had been seeking clarity on UK intentions from the British prime minister Boris Johnson before Friday’s decision, but ambassadors were taking the view that Mr Johnson’s intentions were not a clear guide to what would happen. He thought it was better to see how parliament voted in an election.

The French were on Friday still adamant both that an extension should be shorter than the three months to January 31st suggested by the other member states, and that it should be conditional on a game-changing event like an election. There is a consensus, however, that the UK will be able to leave the EU in advance of that, if and when it ratifies the Withdrawal Agreement.

Unanimity was not possible on Friday so the compromise was agreed to meet the French halfway. The discussion was described by several ambassadors as very useful.

The British government expects the EU to delay Brexit by three months, says British chancellor of the exchequer Sajid Javid.

Mr Javid said Britain was stuck in a “zombie parliament” and that the nation needed to put end to its dysfunction through a general election.

He says the Conservatives will ask parliament “again and again” to back an early general election if the opposition fails to support a snap poll in a vote on Monday.

“We’re going to bring a vote forward for a general election on Monday,” he told LBC radio.

“If Labour does not support that vote, then we will continue to ask for a general election and bring a vote again and again.”

Opposition parties have signalled that they will deny him the two-thirds majority he needs for it. The British prime minister said he would give MPs until November 6th to scrutinise the withdrawal agreement Bill if they agree to an election.

“The way to get Brexit done is, I think, to be reasonable with parliament and say if they genuinely want more time to study this excellent deal, they can have it, but they have to agree to a general election on December 12th,” Mr Johnson told the BBC.

Jeremy Corbyn said he would wait for the European Council’s decision on the extension before saying how Labour would vote on the general election motion.

“Take no-deal off the table and we will absolutely support an election. I’ve been calling an election ever since the last one because this country needs one in order to deal with all the social injustices, but no-deal must be taken off the table,” he said.

EU leaders could grant an extension until January 31st but agree, as they did last April, that the UK could leave earlier if the Brexit deal is ratified. Or they could offer a short extension of a few weeks to allow the deal to be ratified at Westminster but agree to extend it until the end of January if parliament rejects the withdrawal agreement. – Additional reporting from Reuters/PA