World is off course in bid to achieve zero hunger by 2030, warns agriculture expert 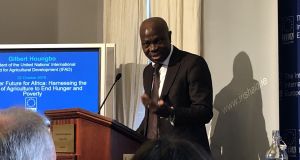 President of the UN International Fund for Agricultural Development, Gilbert Houngbo, addressing the Institute of International and European Affairs in Dublin on Tuesday. Photograph: Kevin O’Sullivan

The world is off course in its efforts to achieve zero hunger by 2030 and failure to address the issue risks undermining other UN sustainable development goals such as good health and poverty eradication, the head of the International Fund for Agricultural Development (IFAD) has warned.

Speaking in Dublin on Tuesday IFAD president Gilbert Houngbo said there was probably a window of just two years to get global efforts back on track through building political commitment and mobilising resources. Given €115 billion a year was needed, and actual funding for agriculture was €10 billion a year, the scale of the gap was obvious, he added.

“If we fall behind on zero hunger, we put the entire 2030 agenda in jeopardy. We must not allow this to happen,” he told the Institute of International and European Affairs.

Mr Houngbo paid tribute to Ireland for its strong support backing IFAD in seeking to scale up ambition and to direct support towards “the furthest behind”.

In spite of current difficulties, he predicted: “We will make it, or be close [to the 2030 target]”. Heightened awareness of the climate crisis was helping to put the hunger issue on a better footing, he said.

In the context of Africa, he said it required better delivery of the message that agriculture could be profitable there. In addition, support had to come from more than overseas development aid (ODA): to include the private sector, governments, philanthropy and scientific expertise.

A proactive approach was needed to manage risk arising from climate disruption, notably in helping countries adapt to the threat of extreme weather, while concentrating on the most vulnerable in societies – frequently those living in rural areas.

“Firstly, we can invest in the resilience of small-scale and family farmers and made a priority to double the productivity and incomes of smallholders,” he said. Small farms already produce more than 50 per cent of all food calories on 30 per cent of the world’s agricultural land. “Just imagine what they could do for food security if they doubled their output.”

Investing in women and giving them equal access to land was proven to have a “multiplier effect” in generating economic growth, he added. “But we need to unblock obstacles for women, who make up 50 per cent of the agricultural workforce.”

Asked if Africa risked ending up being colonised by China in the same way that Europe colonised the continent, he said there was often “an ODA gap” with projects, which delayed getting them off the ground for several years.

With China ready to finance projects and to have them completed in a growing season, what might be a good short-term decision might not be a good long-term one. Governments needed to generate capacity to negotiate in the national interest and “not to accept blindly”.

On Africa’s relationship with Europe, he said: “Our future is linked at the end of the day”. This was because of the proximity factor, which inevitably led to migration.

IFAD was helping young migrants to return home and to establish profitable businesses in rural areas, but non-tariff barriers made access to European markets difficult to achieve. While it was laudable that more and more European consumers wanted organic food sourced locally, it was harder for poorer countries in Africa to export products in such circumstances.

Mr Houngbo’s comments coincided with research published in the current issue of Science predicting that five billion people will face hunger and a lack of clean water by 2050 as the warming climate disrupts pollination, freshwater, and coastal habitats. People living in Africa and South Asia will bear the worst of it, the research warns.