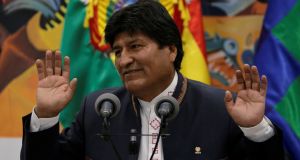 Bolivian president Evo Morales rebuked a regional election observer mission on Thursday for questioning the legitimacy of what he insisted was an outright win for him in the first round of a disputed election.

The leftist leader has a decisive 10-point lead over his main rival in the count following Sunday’s election, which has brought protests and riots in cities across Bolivia, some of which saw electoral offices torched.

At a news conference, Mr Morales said Organization of American States (OAS) observers had slandered him by raising what it called “serious doubts” about the election.

The local OAS team has recommended that Bolivia convene a second-round vote after an unexpected interruption to the count and a sudden shift in Mr Morales’s favour triggered allegations of vote-rigging by the opposition.

“I don’t want to think the OAS mission is already taking part in a coup d’etat,” Mr Morales said, reiterating his accusation that his main rival Carlos Mesa was trying to steal his victory.

“There’s a coup d’etat [orchestrated] internally and externally. The OAS as a whole should evaluate themselves and the mission it sent as well,” Mr Morales said.

The OAS mission did not immediately respond to requests for comment. In a preliminary report, the group cited the disruption to a preliminary tally and the subsequent resignation of the vice president of the electoral board as having damaged the election’s credibility.

Mr Morales, who has governed for almost 14 years, had already faced charges of authoritarianism for running for a fourth term in defiance of term limits and a national referendum that opposed lifting them.

Mr Mesa has called for ongoing peaceful marches until Mr Morales convenes a second-round vote, which an alliance of regional authorities and other opposition leaders backed on Thursday.

Even if he secures another five-year term, Mr Morales will likely govern with his weakest mandate yet and without the solid majority he has thus far enjoyed in Congress.

“I don’t think he’ll be able to finish his term. Not because people will rise up against him but because it will be hard for him to govern,” said Yerko Ilijic, a Bolivian political analyst. He said he expected anti-government protests to eventually fade.

Mr Morales said he would welcome an OAS audit of the final count but urged the group and the international community to respect the South American country’s constitution.

The head of Washington-based OAS, Luis Almagro, has accepted Bolivia’s invitation to carry out an audit but said the group’s conclusions should be legally binding.

Mr Morales appeared to reject that condition, however, saying only “we’re going to negotiate.”

The permanent council of the OAS, which is made up of states in the Western Hemisphere, is expected to receive Bolivia’s foreign minister later in the day after holding a meeting to discuss its election on Wednesday.

On Thursday morning, the official vote count showed Mr Morales had 47 per cent with nearly 99 per cent of ballots counted – putting him 10 points ahead of Mr Mesa. The winner needs 40 per cent of votes plus a 10-point lead to win outright and avoid a December 15th second round.

The head of a group of retired Bolivian military officers, Mario Alberto Almeida, called Sunday’s vote the latest “fraudulent” election to give Mr Morales a win and called on the armed forces and military brass to defend the constitution.

Presidency minister Juan Ramon Quintana dismissed the group Mr Almeida represents as “tin soldiers” linked to past dictatorships and said the military would be loyal to Mr Morales’s government. – Reuters