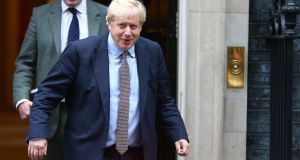 Boris Johnson will ask MPs next Monday to approve a general election on December 12th but opposition parties have signalled that they will deny him the two-thirds majority he needs for it. The UK prime minister said he would give MPs until November 6th to scrutinise the withdrawal agreement Bill if they agree to an election.

“The way to get Brexit done is, I think, to be reasonable with parliament and say if they genuinely want more time to study this excellent deal, they can have it, but they have to agree to a general election on December 12th,” he told the BBC.

EU leaders meet in Brussels on Friday to consider the UK’s request for a three-month delay to Brexit as Mr Johnson is set to miss the October 31st deadline for leaving. Jeremy Corbyn said he would wait for the European Council’s decision on the extension before saying how Labour would vote on the general election motion.

“Take no-deal off the table and we will absolutely support an election. I’ve been calling an election ever since the last one because this country needs one in order to deal with all the social injustices, but no-deal must be taken off the table,” he said.

“We are not resisting the chance to have an election. We want an election because we want to take our case to the people of this country, but we do not want this country to be in any danger of crashing out of the EU without a deal because of all the damage that will do to jobs, services and trade all over this country.”

Labour whips sent a memo to MPs on Thursday night, however, telling them the party would abstain on Monday but adding that members could vote against the motion if they wished.

Other opposition parties also said they would oppose the motion, with the Scottish National Party’s Ian Blackford describing the prime minister’s proposal as “barking mad”. Liberal Democrat leader Jo Swinson said Mr Johnson was simply trying to distract from his own failure.

“He has missed his do-or-die deadline and is now demanding that parliament give him a general election and the time to ram through his Bill without proper scrutiny. The Liberal Democrats will not support any election until it is clear that we can avoid crashing out with no deal, and that needs an extension from the EU,” she said.

DUP deputy leader Nigel Dodds said his party would consider the request for an election but would “not be used to create the conditions where a bad deal is forced on parliament nor Northern Ireland”.

EU leaders could grant an extension until January 31st but agree, as they did last April, that the UK could leave earlier if the Brexit deal is ratified. Or they could offer a short extension of a few weeks to allow the deal to be ratified at Westminster but agree to extend it until the end of January if parliament rejects the withdrawal agreement.