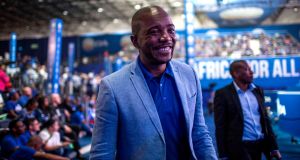 South Africa’s largest opposition party, the Democratic Alliance, is struggling to contain damaging fallout from a leadership crisis that has engulfed the movement following the resignation of its top two office-bearers.

Mmusi Maimane, the party’s first black president, stood down on Wednesday at a press conference in Johannesburg in which he said the DA was no longer “the vehicle best suited” to realise a united South Africa.

“It has become quite clear to me that there exists a grouping within the DA who do not see eye to eye with me,” he said, before explaining there had been consistent efforts to undermine his project to build a party for all South Africans.

Mr Maimane’s resignation was immediately followed by that of the DA’s federal chair, Athol Trollip, one of the 39-year-old’s long-standing allies. Their departures followed the resignation of Johannesburg mayor Herman Mashaba on Monday.

On Thursday the DA’s remaining senior leaders spent the day locked in a federal executive meeting attempting to stabilise the party, avoid further resignations and find a way to pick a new federal leader and chair.

According to the DA, having the party’s top two positions vacant simultaneously was not catered for in its federal constitution.

As a result, Wednesday’s developments appear to have left the party leaderless and in shock, with some political analysts suggesting its future as the main opposition could be under threat.

Mr Maimane was elected the DA’s leader in 2015 in part to attract black voters, as many South Africans see the party as one that represents the interests of minority groups, particularly whites.

However, despite Mr Maimane’s efforts to broaden the DA’s appeal, its support in May’s general election fell to 20.77 per cent, from 22.23 per cent in 2014’s national poll. The result marked the first time in the party’s 25-year history that it lost support in an election.

As well as failing to attract many new black voters on May 8th, the DA also lost around 150,000 supporters – many of whom felt the party under Mr Maimane was indifferent to their interests – to the right-wing Afrikaner party, the Freedom Front Plus.

Matters came to a head last weekend when former party leader Helen Zille re-entered the political fray and was elected chairwoman of the party’s highest decision-making body, the federal council, at the expense of Mr Trollip.

Even though Ms Zille had backed Mr Maimane for the party’s leadership post in 2015, the pair have clashed repeatedly in recent years over her views on colonialism and race.

An election review report was also tabled at the federal council meeting, which among other things called on Mr Maimane to stand down, saying his leadership was indecisive, inconsistent and “conflict averse”.

This had led to confusion in the party about its position on key issues, states the review, including what policies the party should form around race, economic empowerment and redress in post-apartheid South Africa.