Boris Johnson’s promise to take Britain out of the EU by October 31st “come what may” is proving difficult to fulfil after MPs rejected his plan to push through Brexit legislation. Video: UK Parliament 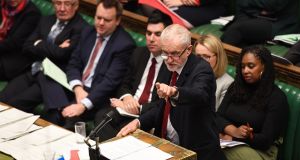 Boris Johnson and Jeremy Corbyn failed on Wednesday to agree a timetable for pressing ahead with the “paused” Brexit bill.

After the British prime minister’s threat on Tuesday to pull the withdrawal agreement bill and press for a general election if MPs rejected his fast-track timetable for approving the legislation, he met Mr Corbyn to discuss the potential for an agreed way forward.

Mr Corbyn, the leader of Labour Party, was accompanied by his key adviser Seumas Miline, and Mr Johnson by Dominic Cummings, as well as the two parties’ respective chief whips. The meeting took place in the prime minister’s House of Commons office.

A Labour spokesman said: “Jeremy Corbyn reiterated Labour’s offer to the prime minister to agree a reasonable timetable to debate, scrutinise and amend the withdrawal agreement bill, and restated that Labour will support a general election when the threat of a no deal crash-out is off the table.”

But Downing Street sources claimed: “Corbyn made clear he has no policy except more delays and to spend 2020 having referendums.”

The lack of progress was shown soon afterwards at prime minister’s questions in the House of Commons, at which Mr Corbyn called for the government to allow parliament “the necessary time to improve on this worse-than-terrible treaty”. In response, Mr Johnson accused Labour of seeking to scupper Brexit.

Mr Corbyn used all his PMQs questions to press Mr Johnson on the withdrawal agreement bill, including standards for environmental, consumer and workers’ rights, and the continued inclusion of Northern Ireland in elements of the EU’s customs union.

After Mr Johnson incorrectly said that there would be “no checks between Northern Ireland and GB”, Mr Corbyn accused him of having not even properly read his own bill.

The Labour leader said: “The prime minister unlawfully prorogued parliament; he said he would refuse to comply with law; he threw Northern Ireland under a bus; he ripped up protections for workers’ rights and environmental protections; lost every vote along the way; and tried to prevent genuine, democratic scrutiny and debate.”

Mr Corbyn added: “Even worse worse than that – he’s not that familiar with it.”

The government lost the programme motion setting up the timetable for scrutinising the legislation by 14 votes on Tuesday night. House of Commons speaker John Bercow said that meant the bill was in “limbo”.

Mr Johnson had sought to push it through the House in just three days, in a bid to meet his “do or die” deadline of leaving the EU on October 31st.

The prime minister had earlier warned that if the EU27 accepted the request for a three-month Brexit delay set out in the letter he reluctantly sent on Saturday night, he would ask MPs to support a snap general election. – Guardian