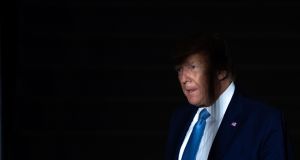 US president Donald Trump: “Thank you to House Republicans for being tough, smart and understanding in detail the greatest Witch Hunt in American History.” Photograph: Saul Loeb/AFP

Senate Republicans introduced a resolution condemning the Democrat-led impeachment inquiry yesterday, as senior members of the Senate denounced the inquiry as illegitimate.

Senator Lindsey Graham, a prominent South Carolina senator and chair of the Senate Judiciary Committee, unveiled the resolution, which was co-sponsored by Senate majority leader Mitch McConnell. The resolution also calls for the House of Representatives to hold a formal vote to start the impeachment process.

“One of the cornerstones of American jurisprudence is due process – the right to confront your accuser, call witnesses on your behalf and challenge the accusations against you. None of this is occurring in the House,” Mr Graham said as he introduced the resolution.

“We cannot have a country where every American has rights except Donald Trump. ” He was speaking after a meeting in the White House where senior Republicans were briefed on the situation in Syria.

Republicans are protesting that the impeachment inquiry into Mr Trump’s activities in Ukraine should be conducted in public, but Democrats argue that precedent allows them to continue in private at this point in the process.

House Speaker Nancy Pelosi ordered an impeachment inquiry last month after the White House released a version of a phone call between the US president and his Ukrainian counterpart, Volodymyr Zelenskiy.

No formal vote to begin official impeachment proceedings has yet taken place in the House of Representatives – the first formal stage in an impeachment process – though three House committees have been interviewing witnesses behind closed doors as part of the more informal impeachment process. There were reports on Thursday, however, that Democrats could move to hold public hearings as early as next month.

Mr Graham’s resolution was tabled a day after two dozen Republicans staged a protest in the US capitol, blocking a witness from testifying for more than five hours. The Republicans entered the secured room in the House of Representatives, bringing in cell phones in breach of strict rules as regards recording and other digital equipment.

Mr Trump appeared to thank the protesting Republicans in a tweet on Thursday.

“Thank you to House Republicans for being tough, smart and understanding in detail the greatest Witch Hunt in American History,” he wrote. “It has been going on since long before I even got Elected (the Insurance Policy!). A total Scam!”

The impeachment inquiry, which is now in its fourth week, paused on Thursday to mark the passing of former chair of the House Oversight Committee, Elijah Cummings, whose body lay in state in the US Capitol.

Two former presidents – Barack Obama and Bill Clinton – as well as Ms Pelosi, are due to speak at his funeral on Friday in his home town of Baltimore.

At a service in the Capitol to mark his untimely death last week at the age of 68, Ms Pelosi paid tribute to the former congressman who served for 23 years.

“Elijah was truly a master of the House. He respected its history, and in it he helped shape America’s future,” she said. “For the children, he wanted a future worthy of their aspirations and true to the values of America.”

Senior Republicans also paid tribute to a man who was known for his bipartisanship. Mark Meadow, a conservative Republican from North Carolina, described his close friendship with a House colleague who was on the opposite side of the aisle politically.

“Perhaps this place and this country would be better served with a few more unexpected friendships. I know I’ve been blessed by one,” he said.

With the impeachment inquiry set to resume on Friday, Mr Trump is due to travel to Columbia, South Carolina, to take part in a criminal justice reform event. Mr Trump has touted the success of the First Step Act – legislation to help long-term prison rates which was also supported by Democrats – as a proof of his commitment to criminal justice reform, an issue that disproportionately affects the African-American community.

Meanwhile, the Democratic field in the presidential primary contest narrowed as Ohio congressman Tim Ryan withdrew from the race. “After seven long months of hard work I will be returning home to my family and friends and community in Ohio to run for re-election for my congressional seat,” he said in a video to supporters. Mr Ryan, who has yet to endorse a candidate, has argued that Democrats need to appeal to their working-class base in order to win the 2016 election.