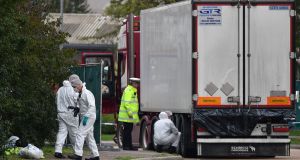 Most Chinese immigrants come from Fujian, a province of 39 million people in the southeast of the country. They are not driven by hunger but by a desire for a better life or to join relatives, or they are forced to leave by gangs seeking cheap labour abroad.

That is what I found when I went there in the aftermath of the discovery of 58 dead Fujian migrants in a container in Dover, England in June 2000.

Most emigrants from the province travel legally and overstay, but a minority of desperate young men and women fall into the clutches of criminal gangs known as “shetou”, or snakeheads, who at that time were smuggling some 100,000 people out of China each year.

In Changle, a district of the provincial capital Fuzhou, residents told me that people-smuggling was regarded as more lucrative than cocaine-dealing, with snakeheads demanding up to €50,000 for passage to England.

Relatives were typically asked to put down a 10 per cent deposit and pay the rest when the criminals got confirmation everything had gone well. The journey typically started at Fuzhou railway station, with groups of 50-60 travelling by train to Beijing, then through Russia to Moscow and from there to English ferry ports, with snakehead agents providing tickets and food.

In the town of Tantou, which has over the years supplied thousands of workers for Chinatowns in US and European cities, I was told that other migrants were taken down the Min estuary to fishing boats for the first leg of their journey abroad.

The Fujian countryside of rocky outcrops and orchards had a large number of unfinished houses cloaked in bamboo scaffolding. I was told that it was common for a peasant farmer to build the walls, then wait years for a family member abroad to gather enough money to add blue-tinted windows and scalloped tiles. Better housing is testament to the long tradition of successful economic migration in Fujian.

Relatives and friends of smuggled emigrants were reluctant to talk to a foreigner about the migrant tragedy in Dover for fear of police harassment. They also worried about reprisals by snakehead thugs who did not want exposure of their methods or of the dire conditions suffered by their customers.

The issue was very sensitive for the Chinese authorities as well, so much so that when interviewing an artist in the coastal town of Jinfeng, I was roughly detained by security police, my interpreter had her face slapped, and I was ordered back to Beijing.

Little has changed in 19 years it seems. The odyssey for Chinese migrants without work visas, then as now, can end with work in a restaurant kitchen, brothel or marijuana farm, or tragically in the back of a sealed container.

Conor O’Clery is former Beijing correspondent of The Irish Times