‘Respect is given’: Australia closes climb on sacred Uluru 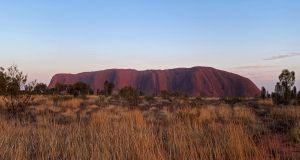 A view of Uluru, formerly known as Ayers Rock, the day before a permanent ban on climbing the monolith takes effect. Photograph: Stefica Bikes/Reuters

Indigenous traditional owners in Ausrtralia have watched tourists climb over their sacred rock Uluru for the final time after years of pleading for people to respect their culture and only walk around the base.

At 4pm on Friday, Parks Australia closed the climb permanently, 34 years after the government officially returned the site to its traditional Anangu owners.

Hundreds of Australian and international visitors had queued to climb the 348m high sandstone monolith, once known as Ayers Rock, on the final day.

Tjiangu Thomas, a 28-year-old Uluru-Kata Tjuta national park ranger, said it had been easy to wake up on Friday knowing the climb was closing for good. “This is really important for me and for Anangu and for the region,” he said. “It’s a strong example of Anangu making decisions for their land.

“At the end of the day, respect is a choice. Obviously it’s disappointing [to see people wanting to climb] but compared to the school holidays this\crowd] isn’t too much.”

For years a sign at the foot of the rock encouraged visitors to respect the wishes of traditional owners and “please don’t climb” and to instead walk the 10.6km track around the base.

Aboriginal people have lived in the area for at least 30,000 years. Uluru’s origins in formation go back half a billion years.

The first non-Aboriginal person to see the rock was the explorer William Gosse in 1873, who, after traversing “wretched country” saw “one immense rock rising abruptly from the plain”. The rock is higher than the Eiffel Tower and extends several kilometres below the ground.

Gosse named it Ayers Rock after Sir Henry Ayres, the chief secretary of South Australia at the time. In 1993 the rock was formally given its traditional name, Uluru.

Climbing of the rock began in the 1930s, taking a spiritually significant route up the steep slope that traced the steps taken by the ancestral Mala men who arrived at Uluru. A chain link handrail was installed in 1966 without consulting traditional owners.

The number of visitors climbing Uluru has been steadily dropping, from about three-quarters of visitors to the site in the 1990s to just 16.5 per cent in 2015.

The Anangu people have said they feel culturally responsible for the safety of people making the trek. At least 36 people have died during the climb, and between 2002-09 rangers rescued 74 people, many struck with heat exhaustion and dehydration.

In 2016, the government resisted persistent pressure to close the climb, but a year ago, a management board meeting of the Uluru-Kata Tjuta national park voted unanimously to ban the practice.

Thomas said: “It’s rather emotional, having elders who picked up this long journey before I was born to close the climb. They’re no longer here, but we’re carrying their legacy to close the climb. So there’s a bit of sadness there, but also happiness knowing that the climb will be closed and respect is going to be given to Anangu’s wishes.

“It takes a lot of our resources to manage the climb and it does take away from the cultural value of this place.”

On Friday, there were cheers among the tourists when rangers opened the climb after a morning closure due to high winds. Some boos also accompanied the first climbers.

On Wednesday and Thursday the climb had been closed intermittently as temperatures went above 36 degrees, the threshold for rangers to close the climb.

At the front of the queue a couple from the south Australian city of Adelaide, who did not want to be named, said the climb was important to them as Australians, “because the rock is a symbol for all of us”.

Hikaru Ide, from Nagano, Japan, who is on a working holiday in Australia, said he had come to Uluru to pay his respects by not climbing. Mr Ide said Uluru was sacred, and to walk around the base was enough.

Watching the last of the climbers, the Anangu man Vince Forrester, from Mutitjulu, said the discoloured and damaged rock along the climbing route was like a scar that would not go away in his lifetime.

He said tourists using the top of the rock as a toilet had poisoned waterholes and wildlife, and he was glad the climb would soon be closed. – Guardian