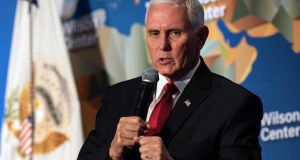 Tough talking: US vice-president Mike Pence delivers a speech on the future of the US relationship with China at the Wilson Center in Washinton DC. Photograph: Getty

US vice-president Mike Pence has criticised the US National Basketball Association’s handling of the China situation on Thursday, saying the league is “acting like a wholly owned subsidiary” of the communist country.

Mr Pence delivered his tough line about an incident, which began with a pro-Hong Kong tweet by Houston Rockets general manager Daryl Morey, during a speech on Thursday at the Wilson Center in Washington, DC.

Mr Pence took issue with how star players went silent in the wake of the controversy caused by Morey’s October 4th tweet: “Fight for Freedom, stand with Hong Kong.”

“Some of the NBA’s biggest players and owners, who routinely exercise their freedom to criticise this country, lose their voices when it comes to the freedom and rights of other peoples,” said Mr Pence during the speech.

China and the NBA remain at odds as the country refused to air pre-season games played in China and the NBA stands to lose billions of dollars after most Chinese businesses with partnerships either cancelled or suspended their deals with the league.

“Nike promotes itself as a so-called social-justice champion, but when it comes to Hong Kong it prefers checking its social conscience at the door,” said Mr Pence. “Nike stores in China actually removed their Houston Rockets merchandise from their shelves to join the Chinese government in protest against the Rockets general manager’s seven-word tweet: ‘Fight for Freedom, stand with Hong Kong.’ ” – Reuters