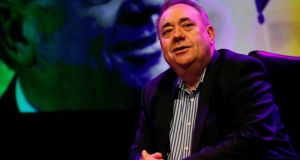 Former first minister of Scotland Alex Salmond said he would have full editorial control over the show. Photograph: Reuters/Russell Cheyne

Some politicians shy away from the public eye after retiring. Not Alex Salmond. Since stepping down as Scottish first minister three years ago, the former Scottish National Party leader has hosted a radio phone-in show, published an autobiography, and presented a sell-out Edinburgh fringe show.

But Mr Salmond’s latest venture could prove his most controversial – hosting a weekly talk show on Russian state-funded broadcaster RT.

Until he lost his seat in June’s general election, the one-time MP for Gordon was one of numerous UK politicians who appeared on RT. Now, he will host the Alex Salmond Show on the Russian channel, starting on Thursday.

Mr Salmond said he would have full editorial control over the show, which is slated to feature interviews with guests from business, entertainment and politics. The former SNP leader called on critics to reserve judgment until the programme airs.

“It would be a great idea if people watched the show, and if it is a good show and it has high production values and has interesting guests with interesting things to say then they should say it is a good show. And if it turns out to be Kremlin propaganda then people can slate me, but why don’t they watch the show first?” Mr Salmond said.

But one person who seems unlikely to watch is Mr Salmond’s successor Nicola Sturgeon. The Scottish first minister said the show “will make interesting viewing – however his choice of channel would not have been my choice”.

Mr Salmond has been a voluble presence on the margins of Scottish nationalism since resigning in the wake of defeat in the 2014 independence referendum. Sturgeon has tended to avoid criticising her predecessor but she questioned Salmond’s decision to work for a broadcaster that has been identified as “an agent of the Russian state” by US officials.

“Of course, Alex is not currently an elected politician and is free to do as he wishes – but had I been asked, I would have advised against RT and suggested he seek a different channel to air what I am sure will be an entertaining show,” Ms Sturgeon said.

The Lib Dems have challenged Mr Salmond to interview opponents of Mr Putin, such as punk band Pussy Riot or Marina Litvinenko, the widow of murdered spy and dissident Alexander Litvinenko.

On Twitter some Scottish nationalists backed Mr Salmond’s move. SNP MP Douglas Chapman tweeted at BBC presenter Andrew Neil that Mr Salmond had “probably got fed up waiting for an offer from the UK propaganda machine ... you know, the one you work for”.

The Alex Salmond Show will be made by Slainte Media, a production company set up in July by Mr Salmond and former SNP MP Tasmina Ahmed-Sheikh.

Russian state broadcasters already have an interest in Scotland. RT covered the independence referendum extensively and, in 2016, Russian news agency Sputnik bypassed London to open its UK office in Edinburgh.