Merkel's climate reputation in tatters as Bonn talks heat up 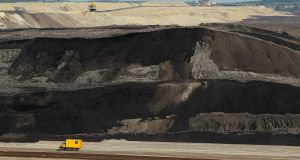 An open-pit lignite mine near Drebkau in Lusatia, Germany. Photograph: Seán Gallup/Getty

The scraggy brown wasteland that stretches to the horizon in Germany’s Lusatia region looks like the end of the world. And, for many of the 25,000 delegates at the 23rd climate conference delegates meeting in Bonn, it is.

The deprived region southeast of Berlin has, in the words of the Gershwin song, plenty of nothing: high unemployment, low growth, structural decline. But this corner of the former East Germany, on the border with Poland, has huge underground deposits of Braunkohle – lignite.

It is one of the dirtiest fuels known to mankind yet, from a metal lookout tower, you can watch massive machines move like mechanical beetles across the landscape, digging up the lignite as they go. The fuel extracted from the open-cast mines is transferred to the nearby plant where it is transformed into power. The rest disappears into the atmosphere from the cooling towers: lots and lots of carbon dioxide.

Not since unification in 1990 has Germany extracted so much lignite as today and yet German leader Angela Merkel enjoys an international reputation as the Klimakanzlerin – the climate chancellor . She earned that reputation with hard work, political clout and negotiating skill dating back to the first climate talks in 1995.

Under her stewardship as German environment minister, agreement was reached on what would become the Kyoto Protocol. In the years since, Merkel has made climate protection a pillar of her politics. But in her 12 years in power, that pillar has developed serious structural flaws.

By 2020, German has promised to reduce CO2 emissions by 40 per cent relative to 1990 levels. Unless something drastic happens, Germany will manage a reduction of just 32 per cent – much of which is down to historical accident: the shuttering of the filthy factories and power plants of the vanished East Germany.

One of the biggest problems is the environmental disaster that is lignite: this “brown coal”, formed from naturally compressed peat, produces more carbon dioxide per tonne burned than oil, gas or regular coal. But the industry continues to thrive because it creates cheap fuel. Some 42 per cent of German energy production in 2016 came from coal: 18 per cent from hard coal and 24 per cent from lignite.

The industry produces a third of Germany’s carbon dioxide emissions yet every attempt to shut down – or at least limit – the coal industry has fallen victim to lobbying and political pragmatism.

When Berlin attempted to introduce a surcharge on coal-burning plants in 2015, energy companies, unions, workers and politicians from mining regions came together to undermine it with pickets and threats.

The surcharge plan isn’t quite dead – it is currently the subject of heated debate in talks for a new coalition in Berlin – but it’s not quite alive either.

Post-Fukushima, nuclear power was out again, and all plants had to go off the grid within 10 years

The Green Party, hoping to return to power in Berlin, wants to take Germany’s 20 dirtiest energy plants off the grid. Blocking them is the liberal, pro-business Free Democratic Party (FDP). Its argument: energy security and the energy transformation or Energiewende. The Energiewende dates back to Japan’s Fukushima nuclear plant accident in 2011, after which Angela Merkel performed one of the most daring pirouettes of her career.

Years after she cancelled plans by Gerhard Schröder’s Social Democrat-Green government to wind down nuclear power in Germany, Merkel decided to perform a second U-turn. Post-Fukushima, nuclear power was out again, and all plants had to go off the grid within 10 years. Since then a hugh rush is under way in Germany to fill the nuclear energy gap.

In 2006 Germany took almost a third of its energy from nuclear sources but, a decade on, renewable energy has filled the gap, supplying 32 per cent of the total. But nuclear still contributes 13 per cent of the energy mix – and the alternatives chosen to replace this remaining slice will be crucial in the coming years.

Energy security – ensuring Germany produces enough energy to keep machines producing in German factories – is a national priority for the next Merkel administration. Climate protection is somewhere down the list.

And so the lignite continues to come out of the ground. But brown coal isn’t the only problem. The ongoing Dieselgate scandal is another telling example of what happens when German industrial and economic interests collide with environmental concerns.

Since coming to office, Merkel has intervened at least three times in Brussels to water down emissions targets seen as hurting the German manufacturers.

This week in Brussels Germany was at it again, scoring concessions in new European Commission carbon dioxide emissions targets. Knowing the chancellor has their back, German car companies have fiddled and defrauded millions of customers worldwide by using software to manipulate emissions so they apparently met environmental targets.

In agriculture, government efforts have failed to reduce manure levels – in fields and in livestock stalls – because that would mean taking on Germany’s powerful farming lobby.

The years ahead will see a delicate balancing act in Germany

Slowly, however, Germans are beginning to see the gap between words and reality. Earlier this week, environmental campaigners stormed a lignite production plant in the western state of North Rhine-Westphalia, where climate conference delegates are meeting. In NRW, home to the Ruhr industrial sprawl, one in five Germans and millions of commuters, lignite plants alone contribute a third of all CO2 emissions.

“No other country in the world uses as much lignite as we use in Germany,” says Uwe Leprich, head of the climate protection and energy department at Germany’s federal environment agency (UBA). He says plans to keep the industry alive – and, in future as an energy reserve– are incompatible with Germany’s climate goals.

The years ahead will see a delicate balancing act in Germany, but the priorities are clear. Former federal energy minister Sigmar Gabriel has said it is unlikely that the last lignite plants will go offline before the 2040s.

On the other hand, if coalition talks in Berlin fail to agree a timetable to close coal-burning plants – following the example of Italy, France, Britain and Finland, the climate chancellor can hand back her badge for good. As she heads into her fourth, and likely final term, Merkel’s reputation in Germany as a green leader is already in tatters.