Bromance in the air, gaffes in the past: Trump’s charmed Asia tour 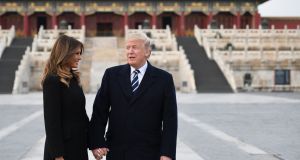 The Asia tour: US president Donald Trump and Melania in the Forbidden City in Beijing. Photograph: AFP/Getty Images

The tweets started soon after Air Force One touched down at Beijing’s dragon-themed international airport, where US president Donald Trump and his wife, Melania, were greeted by hundreds of frantically flag-waving children and the People’s Liberation Army band.

“Looking forward to a full day of meetings with President Xi and our delegations tomorrow. THANK YOU for the beautiful welcome China! @FLOTUS Melania and I will never forget it!”

Twitter, along with most other international social media, may be banned here but clearly the Great Firewall of China was not going to get in the way of Trump’s favourite mode of communication.

Finding a resolution to the North Korean nuclear crisis and addressing hefty trade imbalances with Asian countries were the main objectives for this Asian visit, the longest since George HW Bush in 1991, a mission chiefly remembered because Bush Senior vomited into the lap of then-Japanese prime minister Kiichi Miyazawa.

In contrast, this five-nation Asian visit has been largely gaffe-free, with Trump taking a hard line on North Korea without resorting to insults and pushing an “open-for-business” message that has won over leaders of some of the world’s biggest trading nations.

The timing for Trump couldn’t have been better. Japanese prime minister Shinzo Abe had just secured a fresh, stronger mandate from a snap election. Moon Jae-in in South Korea continues to enjoy strong support after coming to power this year. And Xi Jinping has just staged a successful Communist Party congress that enshrined him as China’s most powerful leader since Chairman Mao Zedong.

Xi and his wife Peng Liyuan whisked the Trumps off to the Forbidden City, the old imperial palace fronted by a giant portrait of the Great Helmsman Mao, facing Tiananmen Square.

Xi doesn’t golf, in fact he disapproves of what the communist cadres call green opium, but Trump won him over by playing a video for his hosts of his six-year-old granddaughter Arabella Kushner performing Chinese classic verse, including a Confucian text that is a mainstay in schools here, and ancient poems by Li Bai.

Xi and his wife had met Arabella in Mar-a-Lago a few months back, and China’s supreme leader responded enthusiastically saying the little girl would get an “A+” for her Chinese skills.

They said Arabella was a star in China, which is true. Chinese social media was beside itself with joy.

“She is an angel showing the friendship between the US and China,” wrote Yuchen on WeChat, while another fan, Sipailuo, spoke of Arabella’s “special gift”. “I love it, it is so meaningful to both countries.”

Trump spoke of his “friendship” with Xi, forged over chocolate cake at Mar-a-Lago. “We have had several conversations about our common goals and interests. Beyond that, we talk often. There is a very good chemistry between the two of us, believe me.”

In Japan, there was mutual praise, fist bumps and bromance galore as the two close allies met. Trump appears to enjoy the company of a “strong man”, and Japan’s prime minster Shinzo Abe sees himself as such. He even keeps Trump’s book The Art of the Deal by his bed.

The relationship with Abe is easier because he likes to play golf. Even Abe’s tumble into a bunker during their trip to the links did nothing to weaken the strong relationship.

In South Korea, Trump moderated his earlier vitriol against North Korean leader Kim Jong-un – no references to Little Rocketman – but he still communicated a very forthright message and expressed strong support for Moon.

His tough talk on the North went down very well in South Korea.

“Today I hope I speak not only for our countries, but for all civilised nations when I say to the North: Do not underestimate us. And do not try us,” he said, before receiving a standing ovation at South Korea’s national assembly.

The US-China relationship is ultimately the key to the whole Asian tour, because China is the emerging power and China is the US’s biggest trading partner.

Japan and South Korea are both US allies in a fundamental sense. The security of Asia post-second World War is predicated on the US commitment to defend Japan, South Korea, Taiwan and the Philippines.

“Trump is nearly a dream come true to China, though one that carries great risk,” said Steve Tsang, director of the Soas China Institute in London.

“Trump’s big ego makes him susceptible to what the Chinese do best, in providing the most sophisticated or elaborate hospitalities. Trump is treated as a king, as Trump liked to call Xi. The ‘king’ is made to feel on top of the world.”

Tsang believes that Xi will gloss over any irritations from Trump, because his goal is to make Trump feel like a king and thereby distract him from the thornier issues of North Korea and trade.

A big set-piece during the China leg of the visit was a ceremony in the Great Hall of the People, preceded by a military parade on Tiananmen Square, where memorandums of understanding for deals worth more than $250 billion (€215 billion) were signed.

Even here Trump moderated his approach. He took aim at China’s enormous trade surplus with the US, but said he “didn’t blame China”. The trade imbalance was the fault of previous US administrations, he said.

The Chinese are embracing Trump, but they also fear his mercurial qualities, and shudder at what could happen if his Twitter-finger gets giddy. In an editorial in the English-language edition of the Global Times tabloid, published by the same group that publishes Communist Party organ People’s Daily, there was praise for his “pragmatic” approach.

“He hasn’t used the issue of human rights to make trouble for China so far, and this means the Sino-US relationship can focus on substantive matters,” it said.

“But there are still concerns that Trump may at some time tweet something embarrassing about China. It could happen because Trump is straightforward, and obviously has some grudges toward China.”

Trump is in southeast Asia now for regional summits in Vietnam and the Philippines, and given the US opposition to China’s territorial ambitions in the South China Sea, the relationship is sure to get complicated again.

After the first day of the China leg, Trump came across as almost coy in his tweet to Xi and his wife (even if Xi is forbidden from accessing Twitter as a state employee).

“On behalf of @FLOTUS Melania and I, THANK YOU for an unforgettable afternoon and evening at the Forbidden City in Beijing, President Xi and Madame Peng Liyuan. We are looking forward to rejoining you tomorrow morning!”

All that was lacking is a “Gnite” and some heart emoticons.