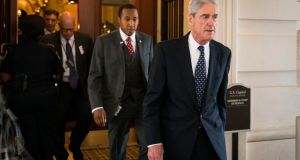 Donald Trump may have been absent from Washington this week on a 12-day trip to Asia but the drama surrounding his presidency continued, albeit behind the scenes.

It is almost two weeks since Robert Mueller, the special counsel appointed to investigate Russian interference in last year’s election, made his first charges, with former Trump campaign chairman Paul Manafort and his long-term business partner Rick Gates appearing in court in Washington charged with 12 crimes including conspiracy against the United States.

The same day documents released by the special counsel showed that George Papadopoulos, a former Trump campaign aide, had pleaded guilty to misleading the FBI about the nature of his contacts with Russian representatives and was now co-operating with police.

This week the Mueller investigation continued apace. On Thursday CNN reported that Stephen Miller, a key Trump aide who continues to work in the White House, was interviewed by the Mueller team. The development is significant – Miller is by far the most senior member of Trump’s team still working at the White House to have been questioned by the special counsel, a sign that the investigation is moving closer to Trump’s inner circle. In particular, Miller (32) is understood to have been questioned about the firing of former FBI director James Comey; Miller is believed to have helped the president draft a letter setting out the reasons for Comey’s dismissal in May.

Reports also surfaced that former national security adviser Mike Flynn is coming into focus as the investigation advances. In particular, the former general is concerned that his son, Michael Flynn jnr, may be brought into the orbit of the investigation.

The younger Michael Flynn worked closely with his father, accompanying him on many overseas trips including a visit to Moscow in December 2015 when the future national security adviser was pictured at a black-tie dinner with Russian president Vladimir Putin.

Also under scrutiny are possible links between Flynn and Turkey during the transition period between Trump’s election as president last November and his inauguration in January. These potential links include allegations that Flynn was involved in a plan to deport Turkish cleric Fethullah Gülen from the US to Turkey in exchange for money.

It was previously disclosed that Flynn, who was fired by Trump after just 24 days in the job, had undertaken lobbying work for Turkey which he had failed to disclose before joining the White House.

Meanwhile, several Republicans on Capitol Hill are calling for the removal of Mueller from the investigation he leads, citing conflicts of interest. The House Freedom Caucus – a group of about 40 conservative Republicans – have highlighted Mueller’s role as head of the FBI when the US government approved the sale of mining company Uranium One to Russian energy company Rosatom. Shareholders in Uranium One donated to the Clinton Foundation.

This week on the floor of the House, Republican congressman Matt Gaetz warned of a “coup d’etat . . . if we allow an unaccountable person [Mueller] with no oversight, to undermine the duly-elected president of the United States”.

While the Trump administration has indicated that the president is not considering firing Mueller, it is significant that an influential group of Republicans on Capitol Hill is setting out its loyalty to the president, particularly if the conclusions of the Mueller investigations lead to calls for impeachment proceedings. Given that Congress decides whether to impeach a president, it would be crucial for Trump to have as many Republicans on side as possible if impeachment was on the horizon.

What is next to come in the Mueller investigation is anyone’s guess. The arrests of Manafort, Gates and particularly Papadopoulos on October 30th took most Washington insiders by surprise, though it is widely expected that Mike Flynn will be questioned by investigators.

Though the Manafort and Gates trials will not begin until next May, the Mueller investigation is likely to take many more twists and turns in the interim.