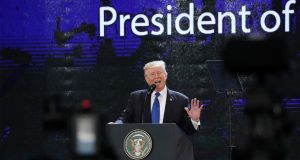 Donald Trump at the summit in Da Nang, Vietnam, on Friday. “When the United States enters into a trading relationship with other countries or other peoples, we will from now on expect that our partners will faithfully follow the rules,” he said. Photograph: SeongJoon Cho/Bloomberg

Donald Trump has abruptly ended the diplomatic streak he displayed on his 12-day tour of Asia by launching a tirade against “violations, cheating or economic aggression” in the region, just hours after heaping lavish praise on China.

Speaking at the Asia-Pacific Economic Co-operation (Apec) conference in Danang, Vietnam, on Friday, the US president’s words had the tone of a fierce reprimand. The speech was clearly, sometimes explicitly, focused on China and other countries he blamed for predatory economic policies, accusing them of having “stripped” jobs, factories and industries out of the United States.

“We can no longer tolerate these chronic trade abuses and we will not tolerate them,” he said, with audio speakers in the large hall crackling as Mr Trump raised his voice at times.

“Despite years of broken promises, we were told that someday soon everybody would behave fairly and responsibly. People in America and throughout the Indo-Pacific region have awaited that day to come but it never has and that is why I am here today,” he said.

Mr Trump addressed a largely mute and visibly stunned audience that included ministers from countries he accused of not “playing by the rules” as the US opened its economy with few conditions. “But while we lowered market barriers, other countries didn’t open their markets to us,” he said.

The US leader then went off-script to confront a man who was speaking audibly during the address and suggested he may be from a country that was cheating America. “Funny, they must be from one of the beneficiaries,” Mr Trump said, laughing. “What country to do you come from, sir?” he added rhetorically.

Just a day before, Mr Trump had trodden relatively lightly in Beijing, accusing China of “taking advantage” of the US on trade but adding that he did not blame Beijing for having done so.

In Vietnam, hours after leaving Beijing, he was far less restrained. “The current trade imbalance is not acceptable,” he said. “The United States will no longer turn a blind eye to violations, cheating or economic aggression. Those days are over,” he added.

Previous US administrations had not done anything about the trade deficit, he said, “but I will ... I am always going to put America first.”

In another dig at China, Mr Trump hinted to other Asian nations that they were not beholden to Beijing or circling its orbit. Indo-Pacific countries represented a “beautiful constellation of nations, each a bright star, satellites to none”, he said.

The speech was markedly different from the reserved tone of the Chinese president, Xi Jinping, who spoke directly after Mr Trump, although to much louder applause and cheers from the audience. Mr Trump had spoken into one microphone, but organisers added three more to the podium before Mr Xi took the stage.

Mr Xi did not directly respond to Mr Trump’s challenge on trade but sought to paint himself as a champion of economic openness, globalisation and the fight against climate change, in contrast to the isolationist US president.

He said: “Openness brings progress while self-seclusion leaves one behind ... The road ahead will not be smooth but we will not give up on our dream.”

Mr Trump’s desire to move away from regional free trade agreements – he prefers to make his own bilateral deals – has been in stark contrast to the words of other leaders at the Apec conference, which will continue on Saturday.

Many delegates had also hoped that meetings in Danang would help resuscitate a moribund Trans-Pacific Partnership. The multinational deal, promoted by Barack Obama as a way to avoid Chinese dominance in Asia, was aimed to eliminate tariffs and trade barriers across a large bloc of nations. But in one of his first acts of office, Trump withdrew from the act.

The annual Apec forum is based on opening markets away from the type of protectionism espoused by the US leader.

In contrast to Mr Trump, who said the US would no longer “enter into large agreements that tie our hands”, Mr Xi told Apec to “support the multilateral trading regime”.

On Friday evening Mr Trump shook hands and exchanged some words with the Russian president Vladimir Putin as they greeted each other during a photo op before an Apec summit gala dinner. The two leaders had been expected to hold a formal meeting on the sidelines of the summit, but as Mr Trump was about to land in Vietnam, the White House announced no meeting would take place, blaming scheduling conflicts.

The US president is scheduled to visit to the Vietnamese capital Hanoi on Saturday, before flying to the Philippines for the last leg of his Asian tour. – Guardian