Three injured after car deliberately drives into group in France 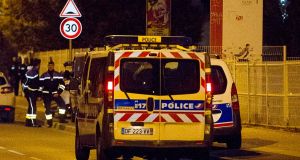 Police cars near the IGS campus, in Blagnac, near Toulouse, France on Friday. Photograph: Frederic Scheiber/EPA

A man deliberately drove his car into a group of people outside a school in Blagnac near Toulouse in southern France on Friday, injuring three Chinese students, police sources said.

The driver of the vehicle, a 28-year-old man, was known to police for committing minor offences but was not on a terrorism watchlist, the sources said.

Mr Couilleau said the driver claimed he acted deliberately and has been arrested.

One of the students, a young woman, was being treated for serious head injuries but none of the injuries is considered life-threatening.

The case has not been referred to France’s counter-terrorism prosecutors.

The driver has long suffered from psychological problems and was hospitalised until December 2016, the prosecutor said.

More than 240 people have been killed in France since early 2015 in attacks by Islamist militants or assailants inspired by the Islamic State group.

Monday will mark the second anniversary of attacks in Paris that killed more than 130 people.

Earlier this week, French police arrested nine people and another was arrested in Switzerland in co-ordinated counter-terrorism swoops. – Reuters