How Nicaragua is becoming a renewable energy paradise

Buffeted by extreme weather, the country is turning wind and volcanic heat into energy 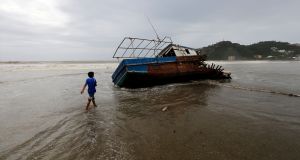 “First came the wind, then water, water everywhere. At first we wanted to stay and protect our things, but then we panicked.”

Patricia Martinez can barely bear to remember the night she and her nine-year-old daughter were almost swept away.

“When the water was halfway up the walls, we knew we had to leave.”

Neighbours attached a rope from a nearby building out to the road, and Patricia and her daughter walked out, clinging to this lifeline. A truck took them to a local church where they stayed for four days.

They returned to utter devastation. Maria Parilla, holding her baby in her arms, points to where the water level reached on her house. “All our mattresses and bedclothes were destroyed, all the stuff on the shelves was swept away,” she says. “Our well is contaminated, our water undrinkable.”

Their tiny community of Pica Pica was caught in a pincer movement when the Ochomogo and Los Loyas rivers flooded and joined together, washing over their land and houses. One woman spent nine hours in a tamarind tree before being rescued. Sixteen people died.

It was Tropical Storm Nate – the one before Ophelia in the alphabetical Atlantic naming system. In this case it combined with a depression in the Pacific.

Nicaragua is a thin strip of land between the two oceans. Buffeted by extreme weather events on either side, it’s the fourth most vulnerable country to climate change, according to the Global Climate Risk Index.

The wind comes when we need it. It starts blowing around five in the afternoon, and dies down around 10, then starts again early in the morning. It’s a magic product

Centro Humboldt, Nicaragua’s foremost environmental NGO, is in no doubt that this is climate change in action.

“This was an abnormal event, definitely related to climate change,” says Agustín Moreira, its agrono-meteorologist, who trained at the National Hurricane Centre in the US. “What we are seeing is a change in weather patterns and those changes are becoming more dramatic. There are more droughts, and when it does rain it is for shorter and more intense periods, causing landslides and flooding.”

The strong winds that blew down trees, knocked out bridges, and brought death and destruction are also driving a new revolution. On the shores of Lake Nicaragua, the waves are whipping up. The wind blows hard enough here to generate electricity almost half the time, one of the highest rates in the world.

At the Amayo wind farm, 30 Indian wind turbines are turning gracefully on Nicaraguan soil, helping generate 20 per cent of the country’s electricity, and a healthy profit for their Israeli owners, IC Power.

“The wind comes when we need it,” says César Zamora of IC Power, who is also chair of Nicaragua’s Chamber of Energy. “It starts blowing around five in the afternoon, and dies down around 10, then starts again early in the morning. It’s a magic product.”

“There is no other future, this is the only one,” he says. “We are going to burn all the oil in 40 or 50 years. This project is making us independent of the price of oil. It’s like buying insurance against the oil price.”

There are now five wind power projects in the area, four of them private.

Zamora is the first to admit it was economic not environmental reasons that drove Nicaragua’s investment in renewables. “In the mid-2000s we had an energy crisis, with brownouts for up to eight hours a day” he says. “At the same time the price of bunker fuel [heavy fuel oil] reached $95 a barrel.”

He says the private sector went to the government, and proposed a seven-year tax exemption for renewable energy projects.

“We copied and pasted a law from Guatemala,” says Zamora. “Ten years ago this country was generating 85 per cent of its electricity from fossil fuels, now its 52 per cent renewables.”

The net result is that the second-poorest country in the western hemisphere has been described as a renewable energy paradise by the World Bank. The country’s energy minister Salvador Mansell has now set a target of 90 per cent renewables by 2027.

Ireland, by contrast, is expected to miss its far more modest target of 40 per cent by 2020, and face fines from the EU.

Nicaragua already contributes very little to global emissions – only 0.03 per cent of the global total. Its per capita figure is tiny by world and Irish standards. Now it’s committed to cutting them even further, by joining the Paris Agreement, having taken a contrarian stand at the start by refusing to sign. Its negotiator Paul Oquist had said Nicaragua wouldn’t be an accomplice to driving the world to destruction.

But once Donald Trump announced that he planned to withdraw from the Paris Agreement, Nicaragua had a change of heart. Being repeatedly mentioned in the same sentence as Syria and Donald Trump doesn’t do a lot for your international reputation, even if your argument was that the agreement didn’t go far enough.

Nicaragua sits on the 'Ring of Fire' and has 19 volcanoes, making it one of the most active areas on earth

The US, Syria and Nicaragua were the only three countries not in the accord, though Syria announced on Tuesday that it will be signing up, and Nicaragua has done so.

“Somebody at least had to say, something is wrong here and this is a sham,” says Guillaume Craig of blueEnergy, who has worked in Nicaragua for a decade.

“Now that Nicaragua has signed up, and the US is retracting from it, I also agree. From a very practical standpoint, you make your protest, but you don’t want to be cut out of all the finance mechanisms and green funds the climate accords are supposed to generate.”

As we leave Amayo, the blades are barely turning; they are waiting for the wind, but the wind will come. One of the issues with renewables is that wind, solar and hydropower are not always available, and batteries are needed to store the power they produce.

But there is one form of renewable energy that is available all the time: the heat from deep inside the earth’s core. Nicaragua sits on the “Ring of Fire” and has 19 volcanoes, making it one of the most active areas on earth.

As we grind up the dirt road leading to the San Jacinto power plant, I catch occasional glimpses of Telica’s green slopes. It’s still an active volcano. Today it’s quiet, but as we rise higher, fumaroles bubble and hiss, creating sulphurous pools along the road.

At the entrance to the plant, part of the road has been closed off with hazard tape. Steam has burst through, cutting a hole in it. It’s a reminder of just how volatile the area can be. In 2015 Telica spewed rocks and ash into the air, forcing villages to be evacuated and killing dozens of cattle.

This is where Canadian company Polaris has sited a $450 million investment, part funded by Central American Bank for Economic Integration, generating an average 65MW of electricity. According to its engineers, this is the “safe” side of the volcano, although its insurance company “is always asking what’s happening”.

Plant manager Alexis Osorno explains that water that fell millions of years ago has gathered in cracks and faults around the volcano. “When you drill down – down as far as 3km – you find it as steam, at temperatures of up to 300 degrees, which at high pressure can be converted to electricity.

For the average Nicaraguan, what’s more important is whether or not they have electricity and how reliable it is

Osorno tells me Polaris pays the Nicaraguan government $30,000 a year for the concession. While the project has had its teething problems, it’s now profitable, and is likely to become even more so, according to Canadian stock analysts.

The tumbling cost of solar power has also seen huge investments across Central America. Down the road from Telica, Nicaragua’s first commercial solar plant has just been commissioned at Puerto Sandino on the Pacific coast. Biomass from sugar mills and hydro also contribute to the high rate of renewables.

For the average Nicaraguan, what’s more important is whether or not they have electricity and how reliable it is. The government says 90 per cent of the population is now connected, leaving around 600,000 people beyond reach of the grid. Mini-grids and solar panels are among the solutions to reach those in remote areas in the mountains and on the Caribbean coast.

However, while Nicaragua may be a renewable electricity paradise, it’s not all good news when it comes to climate change. Transport is 100 per cent fossil fuel. Most of the country’s food is still cooked on woodstoves, using precious trees to prepare tortillas, rice and beans. The government is also accused of not taking the issue of commercial deforestation seriously.

“The government has two faces,” says Agustín Moreira of Centro Humboldt, “They’re signing the Paris accords, but that’s really to keep the private sector happy. At the same time they are giving logging concessions in the high mountains.”

Back at the Ochomogo River, which burst its banks during Storm Nate, some of those affected are beginning to see the connection.

“We can talk about the contamination by the other countries’ CO2 emissions,” says Jacquelyn Molino, who saw how the river tore through his village. “But in this area they are cutting trees on the hills upstream. If you cut down the trees there is nothing to slow down the wind, or hold the water in the ground. We are all to blame.”

This report was supported by the Simon Cumbers Fund

Monday: The Solar Women of Nicaragua