In Sutherland Springs the right to bear arms is a creed as strong as the Baptist faith. But is last weekend’s massacre causing residents to think again? 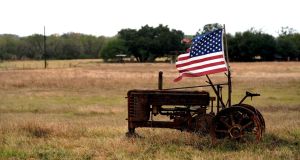 A tattered US flag flies on an old tractor in a farm field outside Sutherland Springs, near the site of the shooting at the First Baptist Church in Texas. Photograph: Reuters/Rick Wilking

Across the empty fields of southern Texas, the silence hung heavy in the air. The tiny community of Sutherland Springs was thrown into chaos last weekend as a lone gunman parked his truck across from the First Baptist Church shortly after 11.20am and began shooting.

Seconds later he entered the church through its western-facing door, continuing to fire from his Ruger AR-556 rifle. According to reports from the few victims who survived the mass shooting, Devin Patrick Kelley methodically strode along the pews of the tiny church, shooting victims, including children, at point-blank range as people screamed for mercy and prayed. Over the course of seven minutes the gunman, masked and clad in black, fired up to 400 rounds of ammunition from his military-style assault weapon.

By Wednesday, 26 makeshift crosses were erected in the nearby field to mark those who had lost their lives in the attack. At the small local cemetery where people have been laid to rest for more than 150 years, preparations were being made for the burials, with the first due to take place on Saturday.

Sutherland Springs could be any small town in rural America. Quiet and remote, the village itself is little more than a crossroads, with a post office and two gas stations signifying the centre.

In nearby Floresville, the closest town to Sutherland Springs where many of the victims attended school and the local medical centre received the first victims, dollar thrift shops and low-rent motels stretch along the main street, hinting at a poverty that exists beneath the surface.

Though predominantly white, the area has a strong Hispanic presence, the result of centuries of immigration from Mexico, situated less than 200 miles away.

In many ways, Sutherland Springs is a world away from Las Vegas, the glitzy exuberant city which became the site of America’s largest mass shooting on October 1st when Stephen Paddock opened fire on concert-goers from the window of the Mandalay Bay Hotel, killing 58 people.

But on November 5th, both places were united, as a small Texan community became the latest US place to become synonymous with mass murder.

The latest mass shooting to unfold in the US has once again brought the issue of gun control to the fore.

Almost immediately there were calls from Democrats for legislative action. “None of this is inevitable,” said Connecticut senator Chris Murphy, whose constituents were killed in the Sandy Hook school massacre in 2012. “No other country endures this pace of mass carnage like America. It is uniquely and tragically American. As long as our nation chooses to flood the county with dangerous weapons and consciously let those weapons fall into the hands of dangerous people, these killings will not abate.”

But Republicans took a different approach. In marked contrast to his response to previous violent events when he called for immediate action, president Donald Trump suggested there was nothing that could have been done to avoid the shooting. The president who had called for the death penalty to be imposed on New York attacker Sayfullo Saipov just days earlier, said it was too early to discuss the issue of gun control and said the situation in Texas was a “mental health” issue and not a “gun situation”.

The fact that Kelley was confronted by a private citizen with a legally-held firearm who was hailed as a saviour also bolstered the case of those who see gun ownership as a constitutional right.

The statistics tell their own story, however. More than 33,000 people died in gun-related deaths in the US last year, more than half of which were suicide. But in terms of mass shootings, the US leads the way.

A mass shooting – defined as an incident when four or more people are killed – takes place on average nine out of 10 days in the US, according to the organisation Gun Violence Archive. While Americans make up less than 5 per cent of the global population, more than 31 per cent of the perpetrators of mass shootings have been American over the last 50 years.

According to attorney Ali Freilich of the Giffords Law Center, an organisation that developed after the violent gun attack on Congresswoman Gabrielle Giffords in 2011, states have significant power to act in the area of gun legislation given the traditional absence of strong federal intervention in this area. “Our research has shown that, the stronger the state laws the fewer people die of gun violence,” he says. For example, states with their own background checks have about 40 per cent fewer homicide rates.

As with the Las Vegas massacre, the latest atrocity has spurred some calls for action – though these are limited to specific changes rather than any comprehensive willingness to seriously examine gun legislation.

In the case of the Las Vegas shooting the focus was on “bump stocks, a device used by Stephen Paddock that is fitted to semi-automatic weapons to mimic automatic firing. Despite the Republican party leadership and the powerful National Rifle Association indicating that they were in favour of curbing access to the devices, no legislation has been forthcoming.

The Texas shootings have focused attention on another issue – the background check system that allowed Devin Kelley to acquire an assault weapon. Kelley was imprisoned and discharged from the airforce in 2012 for assaulting his then wife and infant stepson, convictions that should have prohibited him from acquiring an assault-style firearm.

It is not the first time the background check system has failed. Virginia Tech shooter Seung-Hui Cho who killed 32 people in 2007 had been previously ordered by a special justice to attend treatment because of an “imminent danger to himself as a result of mental illness” but was allowed to acquire a firearm.

Similarly, Dylann Roof, the white supremacist who shot dead nine black worshippers in a church in Charleston in 2015, had previous convictions for drug possession which should have made him ineligible for purchasing the weapon he used to commit the atrocity. The Senate Judiciary Committee will hold a hearing on the issue next week.

In the town of Sutherland Springs this week, a region that overwhelmingly voted for Trump in last year’s presidential election, the right to bear arms is a creed as strong as the Baptist faith that binds this community together.

But most people in the area agree that the gunman should never have been permitted to acquire an assault weapon given his history. “Those guns should be used by the military. Not by a regular guy, particularly someone with a mental health problem,” local resident Norma said.

Changing the ethos that believes in the sanctity of the second amendment, will be more difficult, however.

Across the street from the Floresville medical centre where some of the first victims of the atrocity arrived on Sunday, a gun store stands alongside a family dentistry in a small shopping strip. On the outskirts of nearby San Antonio huge signs for the weekend “gun show” tower along the freeways.

As I leave San Antonio airport, a conversation that takes place in the security queue encapsulates the deep cultural commitment to gun ownership in this part of the world. One lady recounts to her colleague how her husband brought her friend to the shooting range before dropping him to the airport. “He got stopped and questioned – gunpowder showed up on the security system. Who’d have thought it would have picked that up?” she says, genially.

“You can never be too careful,” the other person concurs with a smile.