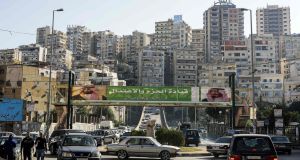 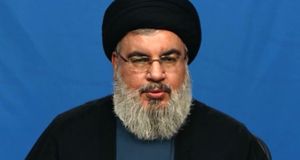 Hizbullah’s leader said on Friday that Saudi Arabia had declared war on Lebanon and his Iran-backed group, accusing Riyadh of detaining Saad Hariri and forcing him to resign as Lebanon’s prime minister to destabilise the country.

France became the first Western country to indicate that Saudi Arabia was holding Mr Hariri against his will, saying it wished for him to have “all his freedom of movement and be fully able to play the essential role that is his in Lebanon”.

Mr Hariri’s resignation has plunged Lebanon into crisis, thrusting the small Arab country back to the forefront of regional rivalry between the Sunni Muslim monarchy Saudi Arabia and Shia revolutionary Iran.

Sayyed Hassan Nasrallah, the Hizbullah leader, said Saudi Arabia’s detention of Mr Hariri, a long-time Saudi ally who declared his resignation while in Riyadh last Saturday, was an insult to all Lebanese and he must return to Lebanon.

“Let us say things as they are: the man is detained in Saudi Arabia and forbidden until this moment from returning to Lebanon,” Mr Nasrallah said in a televised speech.

“It is clear that Saudi Arabia and Saudi officials have declared war on Lebanon and on Hizbullah in Lebanon,” he said.

His comments mirror an accusation by Riyadh on Monday that Lebanon and Hizbullah had declared war on the conservative Gulf Arab kingdom.

Riyadh says Mr Hariri is a free man and he decided to resign because Hizbullah was calling the shots in his government. Saudi Arabia considers Hizbullah to be its enemy in conflicts across the Middle East, including Syria and Yemen.

Western countries have looked on with alarm at the rising regional tension.

US secretary of state Rex Tillerson warned other countries and groups against using Lebanon as a vehicle for a larger proxy fight in the Middle East, saying Washington strongly backed Lebanon’s independence and respected Mr Hariri as a strong partner of the United States, still referring to him as prime minister.

“There is no legitimate place or role in Lebanon for any foreign forces, militias or armed elements other than the legitimate security forces of the Lebanese state,” Mr Tillerson said in a statement released by the US State Department.

Mr Tillerson told reporters on Friday there was no indication that Mr Hariri was being held in Saudi Arabia against his will but that the United States was monitoring the situation.

Mr Hariri has made no public remarks since announcing his resignation in a speech televised from Saudi Arabia, saying he feared assassination and accusing Iran and Hizbullah of sowing strife in the Arab world.

Two top Lebanese government officials, a senior politician close to Mr Hariri and a fourth source said on Thursday that the Lebanese authorities believed Mr Hariri was being held in Saudi Arabia.

Mr Nasrallah said Saudi Arabia was encouraging Israel to attack Lebanon. While an Israeli attack could not be ruled out entirely, he said, it was unlikely partly because Israel knew it would pay a very high price. “I warn them against any miscalculation or any step to exploit the situation,” he said.

“Saudi will fail in Lebanon as it has failed on all fronts,” Mr Nasrallah said.

Riyadh has advised Saudi citizens not to travel to Lebanon, or if already there to leave as soon as possible. Other Gulf states have also issued travel warnings. Those steps have raised concern that Riyadh could take measures against the tiny Arab state, which hosts 1.5 million Syrian refugees.

Mr Hariri’s resignation is being widely seen as part of a Saudi attempt to counter Iran as its influence deepens in Syria and Iraq and as Riyadh and its allies battle Iranian-allied Houthi rebels in Yemen.

Mr Hariri’s resignation unravelled a political deal among rival factions that made him prime minister and President Michel Aoun, a political ally of Hizbullah, head of state last year.

Mr Aoun told Saudi Arabia’s envoy on Friday that Mr Hariri must return to Lebanon and the circumstances surrounding his resignation as prime minister while in Saudi Arabia were unacceptable, presidential sources said.

An “international support group” of countries concerned about Lebanon, which includes the United States, Russia and France, appealed for Lebanon “to continue to be shielded from tensions in the region”. In a statement, they also welcomed Mr Aoun’s call for Mr Hariri to return.

In comments to Reuters, top Lebanese Druze politician Walid Jumblatt said Lebanon did not deserve to be accused of declaring war on Saudi Arabia. “For decades we’ve been friends,” he said.

“We are a country that is squeezed between two antagonistic interests, between Saudi Arabia and Iran,” he said. “The majority of Lebanese are just paying the price ... Lebanon can not afford to declare a war against anybody.”

The Saudi foreign minister accused Hizbullah of a role in the launching of a ballistic missile at Riyadh from Yemen on Saturday. Saudi Arabia’s crown prince Mohammed bin Salman said Iran’s supply of rockets to militias in Yemen was an act of “direct military aggression” that could be an act of war.

Mr Nasrallah mocked the Saudi accusation that Iran and Hizbullah were behind the firing of the missile from Yemen, saying Yemenis were capable of building their own missiles. – Reuters