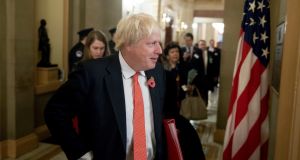 Iranian state television has cited Boris Johnson’s erroneous statement about Nazanin Zaghari-Ratcliffe as “an inadvertent confession” that she was spying in Iran. Photograph. EPA/Michael Reynolds

Boris Johnson has described Donald Trump as “one of the great global brands” and said he was penetrating corners of the world’s consciousness that few other presidents have managed to reach.

The UK foreign secretary’s praise on the US cable show Fox and Friends came as he may find himself hauled in front of a parliamentary committee for failing to correct remarks in which he suggested a jailed British-Iranian dual national may have been training journalists in Iran, leaving her open to further charges.

Iranian state television has cited his erroneous statement about her as “an inadvertent confession” that she was spying in Iran.

Mr Johnson’s description of the US president came on Mr Trump’s favourite TV channel, Fox News. He is in US to speak to members of Congress about the need to retain the Iranian nuclear deal, which the president has refused to re-certify.

“The American president is one of the great huge global brands and is penetrating corners of the global consciousness that I think few other presidents have ever done,” he said.

He defended Trump’s controversial tweets, saying they were an effective means of communication, “no matter how rambunctious”.

Mr Johnson accepted he faced some consular issues in Iran after his remarks about Nazanin Zaghari-Ratcliffe were seized on by the Iranian judiciary to press further charges against her. She is currently serving a five-year jail term after being accused of espionage – a charge she denies.

Labour MPs are considering sending him to the privileges committee for making an untruthful statement to the effect that she had been conducting journalism courses in Iran.

Mr Johnson has accepted his remarks could have been clearer, but insists they were deliberately misconstrued and refuses to apologise. He claims to have had assurances from Tehran that his remarks have had no effect on the judicial process in Iran, and said he had underlined, in his conversation with the Iranian government, that Ms Zaghari-Ratcliffe had not been training journalists.

Johnson has promised to visit Iran before Christmas and if appropriate will visit her in jail.

Some Tory MPs are aghast at his handling of the issue and claim his remarks have made Ms Zaghari-Ratcliffe a much more precious bargaining commodity for Tehran.

On Wednesday evening, news bulletin from Iran’s national television (IRIB), whose programmes of such nature are sanctioned by senior officials, referred to Mr Johnson’s comments as evidence that Ms Zaghari-Ratcliffe was conducting illegal affairs in Iran.

The Iranian judiciary’s news website also carried a news article on Wednesday with the headline: “Spy or human rights activist”. The news broadcast, which was entitled “Confession”, said: “Mr Johnson’s inadvertent confession meant that [she] was teaching some Iranian journalists – it was a gaffe that cannot be covered up. The sole sentence uttered from the mouth of the UK foreign secretary put the efforts of the British media [propaganda] in vain.”

Ms Zaghari-Ratcliffe was arrested in April last year when she and her young daughter, Gabriella (3), were about to return to the UK from Iran after what her husband has said was a family visit.

Since then, she has spent most of her time in Evin prison in Tehran, while Gabriella has been in the care of her mother’s Iranian family. – Guardian