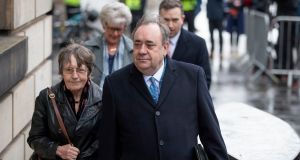 Former Scottish first minister Alex Salmond arrives at the High Court in Edinburgh for the second day of his trial over accusations of sexual assault, including one of attempted rape. Photograph: Jane Barlow/PA Wire

A key witness in the Alex Salmond trial has rejected an accusation that she fabricated claims he assaulted and attempted to rape her when he was the Scottish first minister.

Witness H, who cannot be named for legal reasons, told the high court in Edinburgh on Monday that Salmond had sexually assaulted her in May 2014 and tried to rape her the following month.

Mr Salmond, former leader of the Scottish National Party and a former MP and MSP, is on trial for 14 sexual offences including attempted rape, one count of intent to rape, 10 charges involving numerous sexual assaults and two of indecent assault. He denies all the charges.

During her second day of evidence, H, a former Scottish government official, told the court again that Salmond had stripped her clothes off in a bedroom at Bute House, the first minister’s official residence in Edinburgh, and lain naked on top of her.

Shelagh McCall QC, one of Mr Salmond’s lawyers, repeatedly challenged H’s accounts of the events, accusing her of making up both allegations and of changing her story since giving two interviews on oath to police in late 2018 and early 2019.

She also accused H of contacting three other women who are also crown witnesses against Mr Salmond, including people who accuse him of sexual assault and intent to rape, in the early stages of the police investigation.

H told the court on Monday that Mr Salmond attempted to rape her after a private dinner at Bute House with a celebrity in June. But she had not mentioned attending that dinner to police when she was first interviewed in September 2018.

Ms McCall said H had no evidence of having been there and accused her of lifting details about the dinner from a public source. “Isn’t the truth of the matter that you weren’t at [the] dinner at all and there was no incident with the first minister?” Ms McCall asked.

“I wish for my life that that is true but it’s not true,” H replied. “[I] wish on my life that the first minister was a nicer and a better man and I wasn’t here.”

H told the court she wished she had shouted for help from security stationed on the ground floor of Bute House and that she had had the strength to leave the bedroom during the attack.

She told the court she froze and panicked, and could not believe she was being attacked again by him so soon after the previous assault. Asked why she did not call out, she said: “I just wish I had. You have to remember that part of my job was to protect him and I didn’t fully understand what was happening.

“This was a man who was often aggressive, often bullying, and was now forcefully trying it on with me in what was feeling like a long period of time.”

H had told the court the first assault happened after Mr Salmond hosted a boozy dinner linked to the Scottish independence campaign at Bute House. Ms McCall told the court that Mr Salmond was able to account for his movements for nearly every evening during May 2014.

The court heard that on 20 days that month he was not at Bute House in the evening, while on nearly every other evening, diaries and calendars showed he hosted events which were not relevant to H’s role in 2014.

Ms McCall challenged H on her contacts with a senior SNP official, Ian McCann, and three other women after the Daily Record reported on August 23rd, 2018, that a Scottish government internal inquiry had upheld complaints from two women of inappropriate behaviour by Mr Salmond.

H told the court she first approached Mr McCann in late 2017 after the Harvey Weinstein allegations surfaced in the US and the #MeToo movement had gained momentum. She did not specify what Mr Salmond had allegedly done to her but warned Mr McCann there had been incidents involving the former party leader.

Ms McCall pressed H to explain why she quickly made contact with other accusers after the Record story and after Mr Salmond disclosed he was suing the Scottish government over its inquiry. She asked H whether two accusers encouraged her to contact the police.

In a text to another accuser two days after the Record story, H wrote: “I’m mulling too. But I have a plan. And means we can be anonymous but see strong repercussions.”

Challenged on what she meant, H said she and the other accuser “had discussed in the past issues around Mr Salmond’s behaviour”.

Ms McCall asked why she contacted another accuser who was then involved in a “ring around” of people who had worked with Mr Salmond. H said she was trying to find out what was happening. “I was trying to figure out what the party and police process was, so I could figure out our path forward,” H said.