Coronavirus: Irish people among those stranded on cruise ship off US coast

President Donald Trump has said he would rather have passengers on a cruise ship, which was denied entry to San Francisco over coronavirus concerns, remain on the Grand Princess. There are a small number of Irish people on board the vessel. 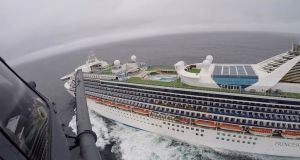 Airmen from the 129th Rescue Wing deliver coronavirus test-kits to the Grand Princess cruise ship off the coast of California. Photograph: US Coast Guard/Handout via Reuters.

A small number of Irish people people are on board a coronavirus-hit cruise ship that is stuck off the coast of California.

A total of 21 people on the Grand Princess have so far tested positive for Covid-19, just under half of all those who have been tested.

Nineteen of those diagnosed are crew members on the ship, which has more than 3,500 people on board including four Irish people and 140 Britons.

A spokesman for the Department of Foreign Affairs said: “The consulate in San Francisco is in touch with local authorities and monitoring the situation closely.

“It is the department’s policy in providing consular assistance that commentary is not given on individual cases and the people or families involved.”

US vice-president Mike Pence said on Friday that the Grand Princess would be directed to a non-commercial port.

Among those onboard is Co Donegal native Pat Kelly, who is the second officer on the cruiser.

Mr Kelly is from Moville and only left the town a month ago to return to sea having spent Christmas and the New Year there. He trained at the National Maritime College in Ringaskiddy, Cork.

A local source said Mr Kelly has been in touch with his family and friends in Co Donegal to let them now that he is in good health.

“He is fine and he has been in touch by phone to reassure his family of that,” the source said.

“Pat is young but he is a very experienced seaman and has been at sea all of his life. He has risen through the ranks quickly. This is just another challenge he will take on board and get on with it.”

A British passenger on board the ship told BBC Radio 4 that she booked a space on the Grand Princess to mark her 70th birthday.

Jackie Bissell, from Dartford in Kent, said passengers were told on Thursday that there might be something wrong.

“We had a note popped through the door saying that this virus might be on the ship — they removed the salt, the pepper,” she said. “We could touch absolutely nothing, if you wanted sugar in your tea or coffee they would come along and do it for you rather than you touching any of these items.

“You can’t go out, you can just go out in the hall if someone taps the door. They put the food outside, drop your menus inside and that’s about it.”

But Ms Bissell said life on board “has not been too bad” so far.

“It was a bit mish mash yesterday but today they’ve got things a lot more organised,” she said.

“We’re very comfortable and everything you need will be brought to you — eventually — and we are absolutely fine and the ship is fine.”

Ms Bissell said those on board have been given very little information on what happens next.

Fellow passengers Neil and Victoria Hanlon, from Bridgwater in Somerset, Englan, said they had noticed some people looking ill as long as a week ago.

“We have passed a few people on the ship about a week ago who did look seriously ill, they had masks and stuff on,” Mr Hanlon told ITV.

“We were in the lift with them which probably wasn’t a good thing. They were going down to where the medical centre was. We asked them if they were okay — their breathing was horrendous.”

The Grand Princess is owned by Princess Cruises, and a spokesman for the company said on Friday evening that it was “awaiting official specific plans for future positioning of the ship from relevant authorities”.

“Princess Cruises will continue to closely follow the guidance of the CDC (Centres for Disease Control) and other federal and state government authorities.”

US President Donald Trump appeared to be in favour of leaving the Grand Princess’s passengers where they are — apparently to avoid increasing the nation’s infection total.

Speaking at the CDC campus in Atlanta, Georgia, on Friday, Mr Trump said: “I like the numbers being where they are. I don’t need to have the numbers double because of one ship that wasn’t our fault.”

Princess Cruises also owns the Diamond Princess ship which was quarantined off the coast of Japan for several weeks earlier this year.

The ship became a breeding ground for the virus as staff continued to carry out their cooking, serving and cleaning duties while the ship was immobile.

Around 700 people caught coronavirus while in quarantine, more than a quarter of the 2,600 people on board.